This is how it happened (Así sucedió) 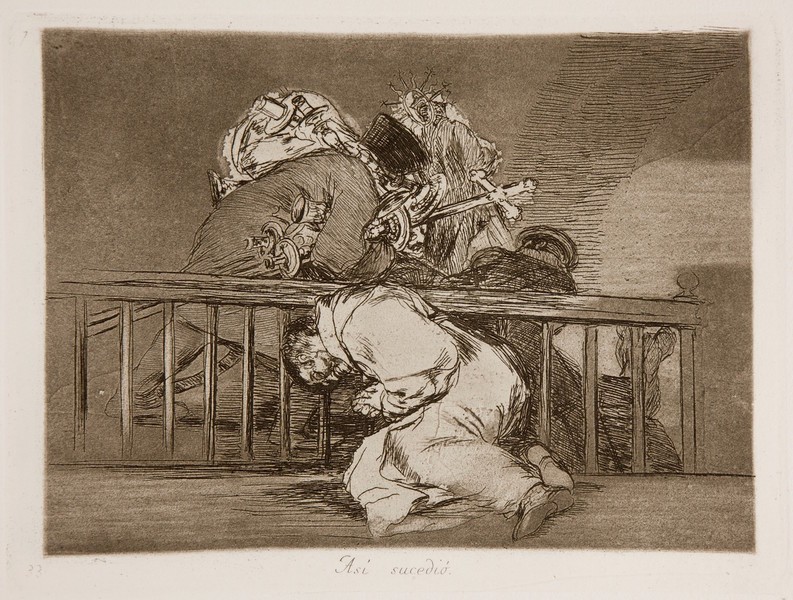 33 (on the lower left-hand corner of the plate).

The second artist's proof reveals the use of burnished lavis up to the edges of the plate and drypoint to render the soldiers and the icon that they are carrying between them. The left-hand shoulder of the soldier on the right has been retouched in burin.

In a dark setting featuring an arch, perhaps of the vestry of a church, some French soldiers are taking flight having stolen some objects of value from the building. One of the soldiers in the foreground whose face is turned away from the viewer is carrying the image of the Virgin Mary, a processional cross and four candlesticks. The thieves leave behind them a seriously injured monk - possibly of the Franciscan order - who kneels before the soldiers, doubled over in terrible pain. He seems to be clasping a knife not visible to the viewer as it is covered by his hands.

The artist has expressed the darkness of the scene by covering the plate with a fine layer of aquatint that has been burnished to light up certain areas, producing a soft texture. The effect achieved with the aquatint means that the lines created with burin seem more violent.

As in the case of the previous print in the series, no. 46, This is bad (Esto es malo), Goya openly criticises the acts of brutal violence that were carried out on the members of some religious orders in times of war and were often recorded in statements and public notices. In this image, rather than fleeing the monk remains in the church, risking his life to defend the sacred objects stored there. In this work Goya employs the same formal device used in print no. 46: the creation of a very dark setting highlights the deplorable behaviour of the French soldiers, who act under the cover of darkness. The artist has made the monk's white habit shine out of this darkness, thereby emphasizing the religious man's innocence.

The sacking of Cuenca, which took place on 17 June 1808, was reported in the Gazeta de Madrid on 5 September of that year. The pillage took place at night: the French soldiers robbed houses and looted monasteries, charitable institutions and churches, stealing treasure and defacing sacred icons. These anticlerical gestures led a section of the ecclesiastical hierarchy to identify an opportunity to portray the war as a new crusade.

The plate is stored in the National Chalcography (cat. 298) .