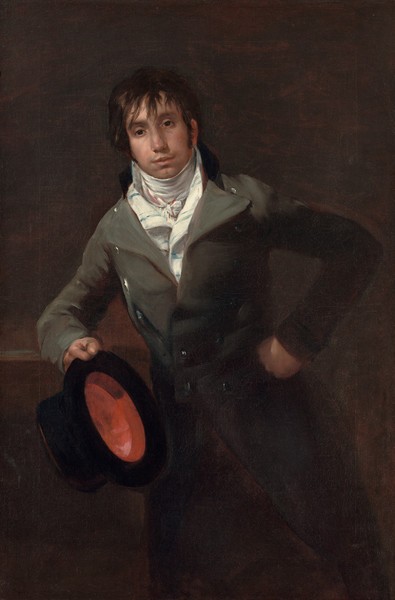 Like its companion piece, the portrait of the sitter's wife, Teresa de Sureda, this work may have come from the collection of Pedro Escat, of Palma de Mallorca, before belonging to the Sureda family in Madrid up until 1907. In 1941 it was donated to the museum by Mr and Mrs P.H.B. Frelinghuysen, the work's last owners.

In 1804, back in Spain, Charles IV named him general director of the Royal Porcelain Factory of Buen Retiro, where he was able to put the techniques learned in England to use. After working in different posts at several royal firms, he retired to Mallorca, where he died.

The subject appears here standing, half leaning, with his right arm on a table and his left hand on his hip. He is showing us his top hat, with its striking red lining.

A light source coming from the top-left corner of the painting lights up his face, shirt and half of his body, leaving the rest in the shadows. The brightness of his white shirt adds light and a cheerfulness to the work.

The neutral background manages to add a sense of volume to the figure.

Sureda's suit is made up of green and greyish brushstrokes, with reddish and white touches.

The look on his face makes him appear somewhat absent, immersed in his thoughts.