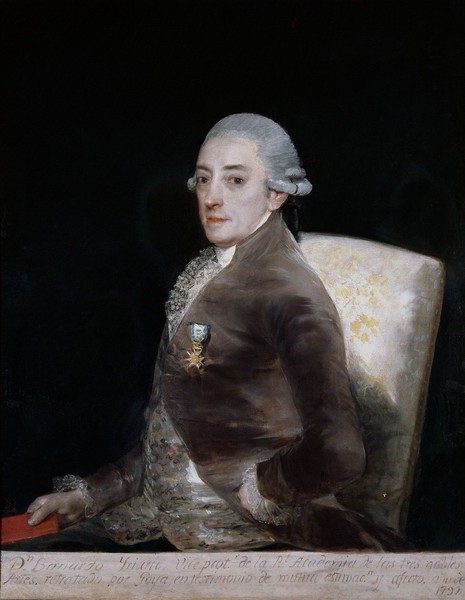 This work went from the Groult collection to the Dorouais collection in Paris. In 1941 it entered the collection of the Strasbourg Fine Arts Museum.

Bernardo Iriarte was born in Puerto de la Cruz (Santa Cruz de Tenerife) in 1735. He was a member of the State Council, Vice-Protector of the Royal Academy of San Fernando and member of the Council of the Indies. A man of progressive ideas, he belonged to the government of Joseph Bonaparte, for which he was forced to go into exile in France upon Ferdinand VII's return to Spain. He died in Bordeaux in 1814.

In this half-length portrait, Goya paints him seated in a chair with his back held very upright. He would have been sixty years old but appears much younger, a technique that Goya used if the sitter so requested. The neutral background gives prominence to the figure, who is wearing a tight-fitting greyish-brown velvet jacket, accompanied by a white shirt with frills at the neck and sleeves. He is wearing the medal of the Order of Charles III. His right hand holds a small red book, whilst his left is hidden from view.

A shaft of light coming from away to the left lights up the face of this ilustrado, along with the back of the chair, where we can appreciate some yellow embroidery which adds a further touch of colour to the scene.

According to Juan J. Luna, the almost awkwardly upright position of the figure is a resource that the painter used in this period to emphasize certain ideas about his sitters and to emphasize their predominant position in a world that was moving faster and faster towards an end that appeared imminent.

There exists a non-autograph copy of this work in the Metropolitan Museum of Art, in New York.