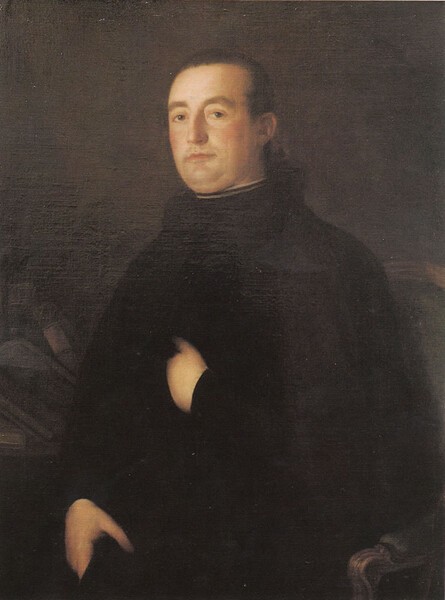 In the 19th century this work belonged to the Aragón-based collection of the Count and Countess of Quinto. It was sold at a public auction held in Paris in 1861 and was later acquired by the painter Ignacio Zuloaga at the beginning of the 20th century.

The identity of the sitter is still not known for certain. Some believe that the work depicts Camilo Goya y Lucientes, the painter's brother, who was ordained a priest in 1785, this possibly being the reason this portrait was painted. Arturo Ansón Navarro has proposed, with some reservations, that it could represent the Huesca clergyman Antonio Arteta de Monteseguro (1745-1813), a friend of Goya and other ilustrados from Aragón, including Martín Zapater and Juan Martín de Goicoechea.

As for its chronology, opinions differ. Whilst Gudiol and Camon Aznar propose a date of 1800, Mayer and Desparmet Fitz-Gerard date the work to 1785, the year in which Camilo was ordained, whilst Ansón puts it in the period between 1780 and 1785, citing certain formal features of the painting and the characteristics it shares with the work of Mengs.

The subject is shown half-length and almost in half profile. He is seated in a green upholstered armchair in front of a neutral hazel-coloured background. To the left, we can just make out a number of books on top of a table. He is wearing the black habit of a prebendary, against which the strongly lit skin tones of his face and hands stand out even more.

It is an extremely simple, sober portrait, precisely modelled and similar to those that Goya painted in the decade of the 1780s of other ilustrado friends, such as Juan Agustín Ceán Bermúdez.