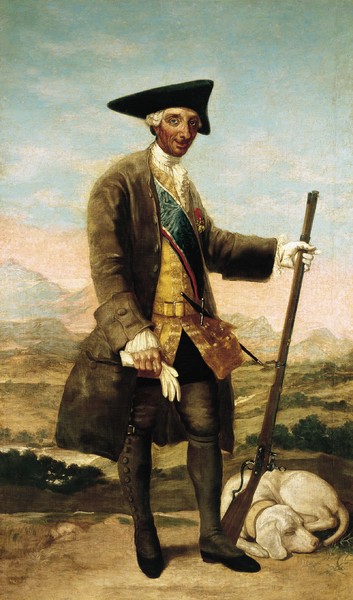 Goya lo hizo ("By Goya", on the lower right-hand side).

This work previously belonged to the Fernán Núñez Collection, the 7th count VII  entruted the picture to Goya.

Charles III, (Madrid, 1716-1788) was King of Spain, Duke of Parma under the name of Charles I and King of Naples and Sicily as Charles VII. In line with the Enlightenment he undertook major reforms with the help of ministers and ilustrados such as Aranda, Campomanes and Floridablanca. He was a cultured man with many reformist ideas. He was also a grand aficionado of the hunt, as this portrait makes clear.

His death in 1788 marked the end of reform and ushered in a far more conservative period at the hands of his son and successor, Charles IV.

According to Fernán Nuñez, in winter the king wore a dress coat made from cloth from Segovia, black suede jacket and breeches, a hat like the one which Goya depicts him wearing in this portrait, lace frills, woollen stockings, boots and suede gloves, which he is here holding in his right hand. On this occasion, he is also holding, in his left hand, a hunting shotgun, and at his feet lies the dog that would have accompanied him on his hunting outings. His face reflects the serenity that this sport afforded him.

The painting clearly shows the influence of Velázquez's hunting portraits.

A replica of this canvas exists in the Prado Museum Charles III Hunting (copy).