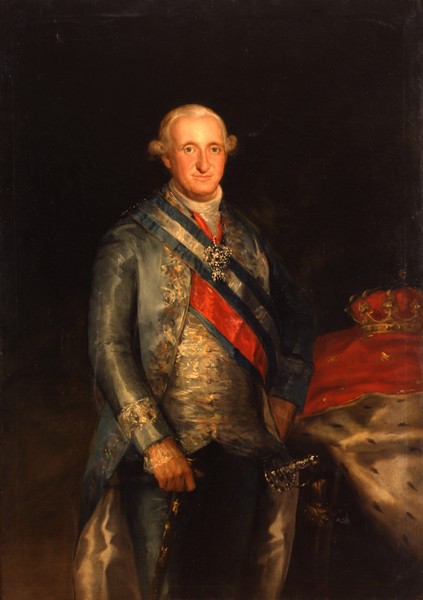 This three-quarter-length portrait shows the king standing in front of a dark, neutral background, following the official model conceived by Goya in 1789 for his royal portraits. The subject is wearing court dress, with a turquoise dress coat over the top of which we can see the Golden Fleece and the sash of the Order of Charles III. In his right hand he holds his baton and his dress sword is visible by his left hand. On the right-hand side, in the background, are the ermine robe and, on top of it, the crown, the royal symbols.

The fact that the sash of the new order of Charles III appears here, as established in the decree of 12 June 1792, leads us to the hypothesis that, just as occurred with the portrait of the queen with which this one made a pair, this portrait was painted in 1789 and was then modified sometime after 1792.

Some writers have claimed that this could be a workshop replica, with limited intervention from Goya.