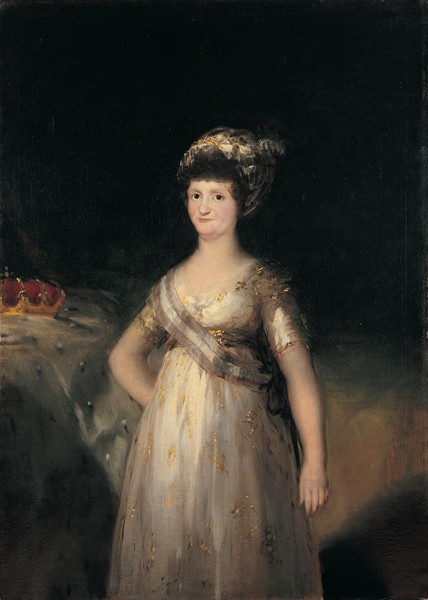 At the beginning of the 20th century, this work belonged to the collection of the Marchioness of Casa Torres, later forming part of two other Spanish collections. Ibercaja acquired it in 1998 through Christie's of London.

For a long time, Goya's authorship of this work was questioned. However, thanks to technical research carried out in 1997 by the Prado Museum, the painting remains attributed to the artist.

The x-rays that were made show that underneath the visible portrait there exists another, painted in 1789, which served as the model for other replicas (for example, that in the Royal Academy of History). Goya painted over the top of that work in order to adapt the image of the queen to a more up-to-date model, conceived in 1799, probably with the intention of either selling the work or making a gift of it.

Whilst maintaining the composition and the position of the figure, the face and the background objects (the crown and the ermine robe), Goya repainted the dress, transforming it into one in the imperial style, made from fine gauze and featuring golden embroidered motifs. He replaced the feather headdress with a turban, making it necessary to darken the background, and completely changed the sitter's right arm, concealing the hand that previously held a fan.