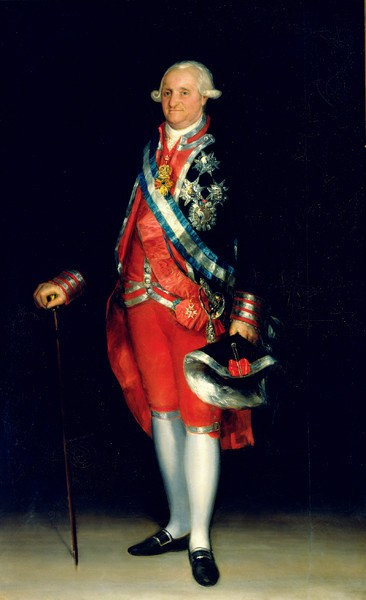 Like its companion piece, María Luisa in Court Dress, this work came from the Royal Collection.

The full-length portrait shows Charles IV standing and turning slightly to the right, in front of a dark, neutral background. He is wearing the uniform of Colonel of the Lifeguards: a blue dress coat with red lining, and a waistcoat and breeches in the same colour. Among the many decorations and medals on his chest we see the sash of the Order of Charles III, the necklace of the Golden Fleece and the red sash of the Order of San Genaro. His right hand is resting on a baton, whilst with his left hand he is holding his hat.

Both Sambricio (1957) and Gassier-Wilson (1970) identified this portrait and its companion piece as being those mentioned in a letter dated 9 June 1800, sent by the queen to Manuel Godoy, which says: "Goya has done my portrait, which they say is the best of all of them. He is doing the king's in the Casa del Labrador". According to Morales and Marín (1997), these portraits may have been commissioned to be sent to Napoleon, an intention which would have been frustrated by the cooling off of relations with France following the War of the Oranges.

The Prado Museum holds a copy of this portrait, painted by Agustín Esteve for Manuel Godoy.