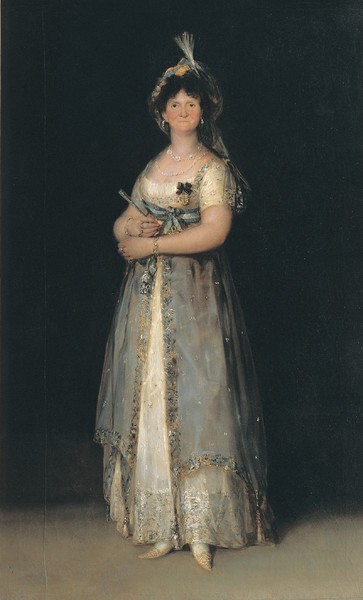 Like its companion piece, Charles IV in uniformof Colonel of the Lifeguards, this work came from the Royal Collection.

This full-length portrait depicts the subject standing, turned slightly to the right, in front of a dark, neutral background. She is wearing a long dress with short sleeves, white and grey in colour, over the top of which we can see the sash and insignia of her order. Her hair is worn up, covered by a turban with a feather. Around her neck are two necklaces of large pearls. In her right hand she holds a fan. On her feet are a pair of pointed white shoes.

Both Sambricio (1957) and Gassier-Wilson (1970) identified this portrait and its companion piece as being those mentioned in a letter dated 9 June 1800, sent by the queen to Manuel Godoy, which says: "Goya has done my portrait, which they say is the best of all of them. He is doing the king's in the Casa del Labrador". According to Morales and Marín (1997), these portraits may have been commissioned to be sent to Napoleon, an intention which would have been frustrated by the cooling off of relations with France following the War of the Oranges.

There is a replica made ​​from this canvas in a Particular Collection, Cadiz.