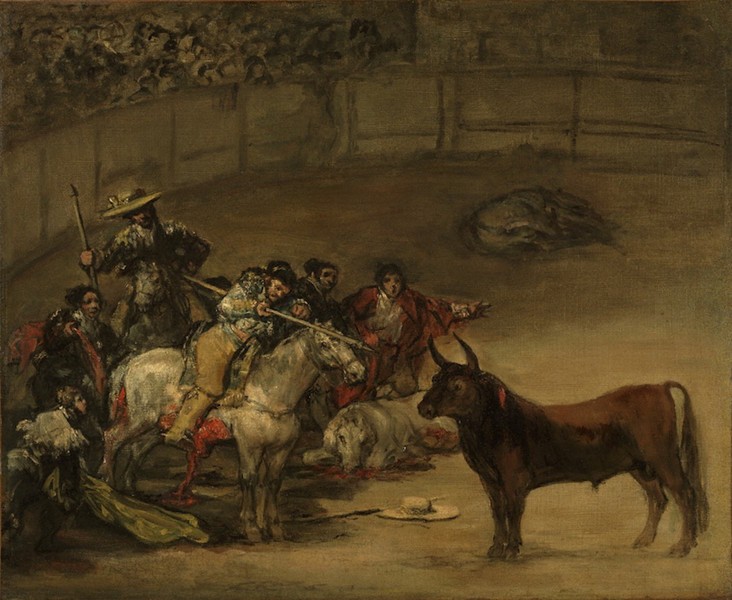 This work was painted during Goya's visit to Paris in July 1824. He stayed in the French capital for three months after leaving Madrid, before moving to Bordeaux. The inscription on the painting referring to his stay was written by Joaquín María Ferrer, as indicated by his initials. It would have been painted at around the same time as the portraits of Ferrer and his wife, Manuela Álvarez Coiñas de Ferrer, and it seems that he was the person who commissioned the work to Goya, with whom he had a friendly relationship.

Goya had addressed the theme of bullfighting on various occasions: in the "Caprice" The Bullfight housed in the San Fernando Academy, in the series of small paintings he produced during his convalescence in 1793, and in the series of prints called Bullfighting. In Bordeaux he would revisit to this subject, producing a set of paintings and the series of four lithographs Bulls of Bordeaux.

The scene captures the final moments of the stage of the bullfight known as the "suerte de varas". The background area of the composition is barely sketched in with light, watery brushstrokes which denote the walls of the bullring and the crowd of spectators. The execution of the figures in the foreground - bullfighters and picadores or mounted bullfighters - contrasts with the simple background, since these are depicted with thick, colourful brushstrokes. The group of bullfighters confronts the bull in a moment of great tension: Goya offsets the brutal activity of the men against the passivity of the animal, who is gazing off to one side. The horned beast is standing still, apparently with no intention of attacking anyone, while the picador, mounted on his badly injured horse, tries to provoke him, thrusting his lance at the bull. Another horse lies wounded on the floor, while further away, abandoned on the empty sand of the ring, we can make out the blurred outline of another. Goya has portrayed the animals in this painting as the real victims of the festival which so fascinated the painter.