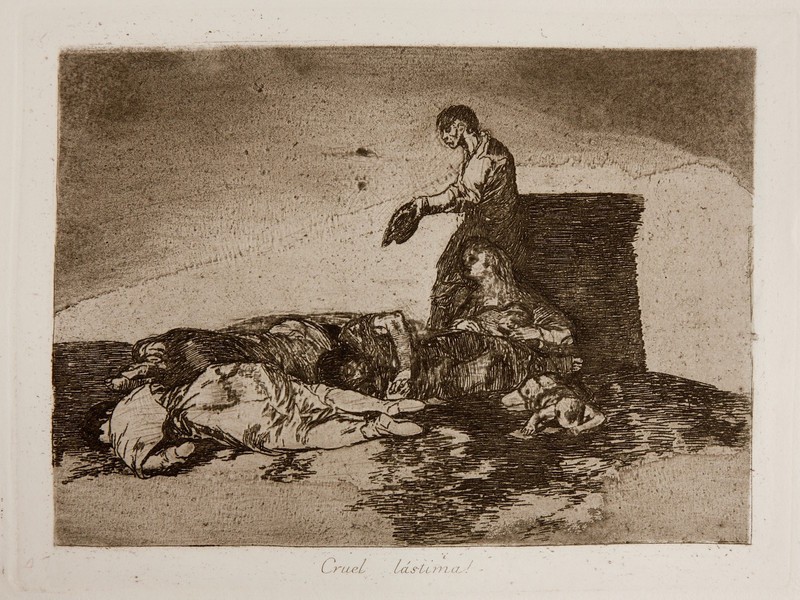 This print begins the second part of the Disasters of War series, in which Goya deals in depth with the subject of hunger as one of the principal consequences of war. The most difficult moments of the war came with the famine of 1811-12. Both the abandonment of lands and the increased population due to the presence of the French army meant that the wheat harvest was very scarce, and it was necessary to resort to making flour from other grains or pulses in order to make bread. The introduction of alternative ingredients into the population's diet and the adulteration of foodstuffs led to significant health problems in the general public. Consequently, in July 1812 bread makers were informed that all bakers employing harmful substances in their products would be subject to harsh punishment.

This image shows a family in the middle of a desolate landscape, surrounded by dead bodies. The man is shown standing side-on, holding out a hat in his hands in the vain hope of receiving alms. The woman sat next to him is holding a child in her arms. Among the different corpses strewn around the family is the striking figure of a dead child.

Goya has created an almost spectral sky in aquatint which looms over the figures in this print but does not protect them. The dead bodies and the three still living figures in the print have been executed in decisively etched strokes. The face of the begging man is emaciated, with protruding jaw, cheekbones and eye sockets, and he wears a lost look. These are the victims of the famine, from which they were unable to defend themselves and which will probably end their lives as it has those of the others around them.