What is the use of a cup? (De qué sirve una taza?) 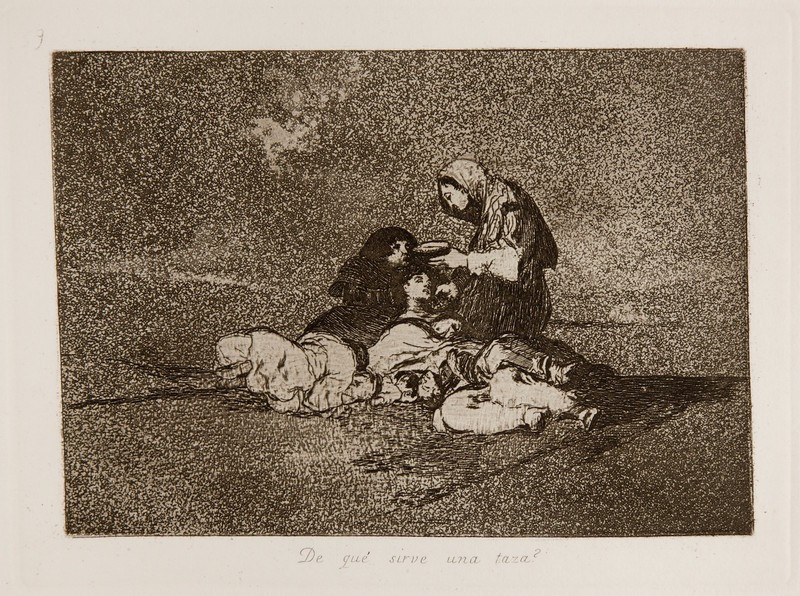 3 (on the lower left-hand corner of the plate).

The second artist's proof shows that the aquatint extends right up to the edges of the page.

In the middle of a desolate landscape a woman helps others who are suffering from the terrible famine that affected Spain during the Spanish War of Independence, in particular between 1811 and 1812. One of the starving women in the centre of the composition lies prone on the ground with her eyes closed, exhausted, with the body of a child in her lap. Behind her, an older woman dressed entirely in black watches with a pained expression as the first figure helps the others.

Goya employs aquatint to render the sky and ground, achieving a granular effect in both areas to the point that it is difficult to tell where one ends and the other begins. Aquatint is also used to depict the women in the centre of the composition in great detail, while some areas on the body of the woman who is lying down and the one holding the cup in her hand have been left blank. There are no other elements to distract the eye from the figures being helped or spatial and temporal references: this gives the scene a markedly abstract, universal air.

The title of the print expresses the futility of the gesture, despite the good will of the person carrying out the act of helping the starving: the famine was extreme, and the available resources were scarce and insufficient.

This print, in which Goya continues to explore the theme of famine experienced during the Spanish War of Independence started in print no. 48, A cruel shame! (Cruel lástima), can be linked to no. 52, They do not arrive in time (No llegan á tiempo), which also depicts a merciful act in which women have a central role.

The plate is stored in the National Chalcography (cat. 310).