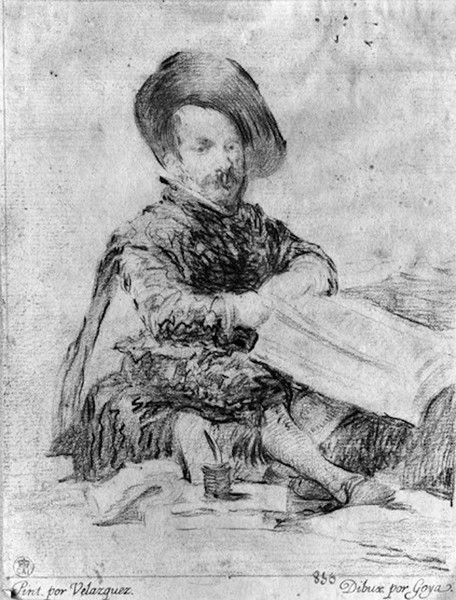 This drawing was bequeathed to the Victoria and Albert Museum in 1900 by C. A. Ionices.

In this preparatory drawing for the etching of Velázquez's painting The Buffoon Don Diego de Acedo, one thing that immediately catches the viewer's attention is the way in which Goya has used quick, zigzagging lines to portray the figure's clothing. Also interesting are the large white patches where the paper has been left blank, representing the books, hands, face and hat of the dwarf. Whereas in Goya's etching, and in the original painting by Velázquez, the face plays an undeniably central role, in this preparatory drawing by Goya, the facial features have been only very lightly suggested. The drawing also shows us that Goya had already, at this early stage, abandoned any attempt to accurately capture the landscape that appears in the background, perhaps because he was aware of the difficulty involved in translating the quick, agile brushstrokes of Velázquez's painting into the language of etching.