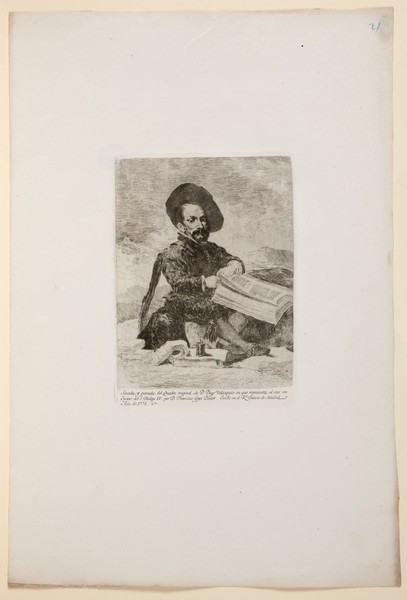 Three copies of this etching have survived to the present day, from the first three editions. The first was made in black ink and the second in greyish-sepia ink. The third was announced in the 3rd edition of the Caprices, in 1868. In it, handwritten in the lower right-hand corner is the word Merelo.

After etching the drawing, two small additions were made: the name Diego Velazquez and the initials FG were added in drypoint in the lower left- and right-hand corners, respectively, in an earlier state. These were later erased when the title was added for the first edition.

Velázquez painted The Buffoon Don Diego de Acedo in Fraga, in the course of the royal sojourn in Aragón during the Catalan Revolt of 1644, when he also painted his three-quarter-length portrait of Philip IV. In actual fact, despite his name, Don Diego Acedo was a palace official who was in charge of the stamp that bore the royal seal. This is why, in the portrait by the Sevillian painter, he is shown with an enormous book in his hands. Sitting on top of another, smaller, volume whose pages are coming loose is a small pot of glue, ready to be used to stick them into place. Next to it, two more books appear, perhaps in order to show the sitter's interest in literature.

The dwarf is elegantly groomed and dressed in a black brocade outfit, with loose sleeves and closed at the neck with a starched collar, black breeches decorated with braids and bows, and black stockings and shoes. He has been placed within outdoor surroundings that Velázquez has painted in a few loose brushstrokes.

Goya accurately copies both the seated figure of the dwarf and the objects arranged around him. The whiteness of the large book that he is holding in his little hands makes it stand out dramatically, along with the intense expression on his face. However, we can see how Goya had some difficulty transferring the landscape to the metal etching plate, where it has become paler and less distinct, consisting only of some low hilltops. We can assume that Goya has rendered the background landscape in such a fleeting way because he was aware of the difficulties it involved, but it is also probable that he opted for a pale background so as to avoid drawing the viewer's attention away from Don Diego Acedo himself.

The etching plate is conserved in the National Chalcography Museum (cat. 168). It came from the Fondo de Recuperación of 1948 (body created to recover works of art taken out of Spain during the Civil War).