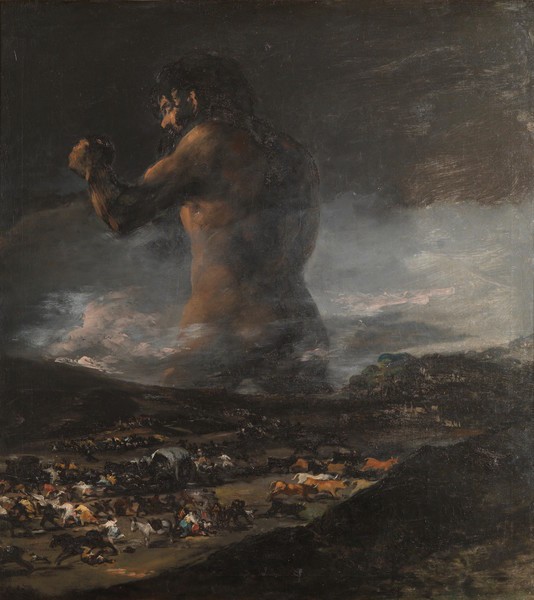 This canvas went to Goya's son, Javier, when the estate of the painter's wife, Josefa Bayeu, was divided up following her death in 1812. It later became the property of Miguel Fernández Durán Fernández de Pinedo y Bizarrón, Marquis of Perales, who died in 1833. His great-grandson Pedro Durán inherited this painting and bequeathed it in his will to the Prado Museum, which it entered in 1931.

In an outdoor landscape, a terrified crowd flees before an apparition of a giant. This monstrous figure has one arm raised, the hand closed into a fist, and one eye closed, as he advances across the width of the canvas.

In most of the interpretations put forward for this painting, and especially with regard the figure of the giant, there prevails the idea, with certain variations, that the work is a reference to the Spanish War of Independence.

López Vázquez and González Zárate believe that the figure of the giant could be a reference to Ferdinand VII - the proud, ignorant, princely figure responsible for the country's War of Independence. Nigel Glendinning, on the other hand, proposed back in 1963 that this painting could be an illustration of the poem by Juan Bautista Arraiza (Madrid, 1770-Madrid, 1837) entitled The Prophecy of the Pyrenees (La profecía del Pirineo) (1808). This poem tells how a giant rose up from the mountains of the Pyrenees to defend Spain from the Napoleonic invasion. The figure of the giant is a relatively common one in Spanish literature and is used by Manuel José Quintana y Lorenzo (Madrid, 1772-Madrid, 1857), by Cristóbal de Breña (Madrid, 1777-Madrid, 1833) and by Francisco Martínez de la Rosa (Granada, 1787-Madrid, 1862).

Alternatively, the colossus has been interpreted as personifying Napoleon's armies, menacing the terrified natives as they flee from the French invaders.

One of the formal sources of inspiration for the figure of the colossus could have been the Farnese Hercules which Francisco de Goya had earlier depicted on pages 139a, 141a, 143a and 145a of his Italian Sketchbook, drawn from a number of different angles. Goya must have seen this classical sculpture during his stay in Rome, between 1769 and 1771, since copying from the Farnese Hercules was a common exercise at the city's academies. The Aragonese artist could also have carried on working with this sculpture once back in Spain by referring to printed reproductions of it, particularly those by Hendrick Goltzius (Bracht, 1558-Haarlem, 1617), which were widely available all over Europe.

Thanks to the x-rays made of The Colossus at the Prado Museum, we have learnt that Goya made a number of changes to this figure. These x-ray images reveal that the painter had originally placed the giant looking out at the viewer, with his left arm resting on his hip in a pose similar to that of the Farnese Hercules. This pose also brings to mind the Hispanic Hercules (Hércules hispano) which Francisco de Zurbarán (Fuente de Cantos, 1598-Madrid, 1664) painted for the Hall of Kingdoms of Madrid's Buen Retiro Palace.

The painting also has ties to Goya's etching and aquatint Seated Giant, dated to between 1808 and 1818, in which the same figure appears with his back to the viewer and, in this case, sitting down. A similar figure was depicted by Henry Fuseli (Polyphemus Tricked by Ulysses, 1803, private collection, Zurich), although said work shows the character after he has been defeated.

The composition of The Colossus shows some similarities with another work by Goya, entitled The Hot Air Balloon. In both pictures, the canvas has been divided lengthways, with the lower section containing a number of people running. In the case of The Hot Air Balloon, these people could be soldiers, whilst in The Colossus they are civilians.

In 2008, to mark the presence of The Colossus in the exhibition Goya in Times of War (15 April-13 June 2008, Prado Museum, Madrid), Manuela Mena, Head Conservator for 18th-century Painting at the Prado Museum, embarked on a renewed investigation of this painting. Her work led to the subsequent publication of the conclusion that the painting belongs not to Francisco de Goya but rather to his disciple, Asensio Julià (Valencia, 1760-Madrid?, 1832). This hypothesis is based on several different pieces of data, perhaps one of the most significant of which is that this painting makes use of a different shade of black from the transparent, more delicate one usually employed by Goya, and which the artist tended to use especially in those paintings where the colour black predominated. Furthermore, thanks to the x-rays made of this painting, we have discovered the constant changes and hesitations which its creator made whilst painting it, behaviour which was not at all usual for Goya, who worked in a far more decided, confident manner.

Finally, this investigation by Mena also makes reference to the initials "AJ" which appeared in the x-ray images of 2008, which could be those of Goya's Valencian disciple, Asensio Julià.

This study of The Colossus has reignited the debate surrounding the work's authorship, in turn prompting responses from some scholars, including Nigel Glendinning, who maintain that this painting should be attributed to Goya.