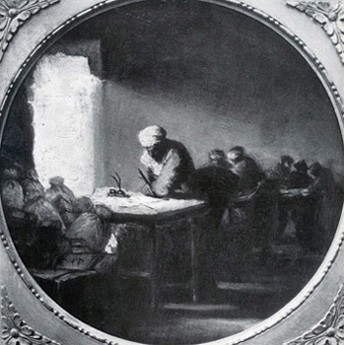 This is a sketch for the painting Commerce which Goya painted for Godoy's palace.

This study presents notable differences from the final piece. The scene shows a room larger than that depicted in the definitive version containing not just one table but a whole row of tables with people sitting at them engrossed in their tasks. The man with the turban is still the main figure in the sketch, but his companion is not present, replaced by a pile of sacks. The absence of the stork which appears in the final painting is notable. This detail suggests that Goya conceived of the allegory of commerce as an everyday scene from the first moment, and later added the figure of the stork in order to include a few allegorical allusions.

Sánchez Cantón studied the inventory of works stored in Goya's house drawn up on the death of Josefa Bayeu in 1812. Among the list of works are five canvasses with an allegorical theme. Four of these are "the Arts", probably the sketches for the series of allegories painted for Godoy's palace. The fifth was "Time", identified as a study for the composition Truth, Time, and History.