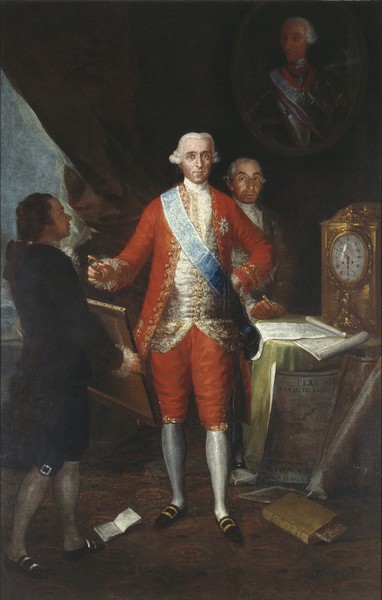 This painting belonged to the Marchioness Martorell y Pontejos, and then to the Count of Miraflores and Marquis of Villanueva de Valdueza, from whom it was acquired by the Urquijo Bank. When this institution disappeared, it became the property of its present owner.

José Moñino y Redondo (Murcia, 1728-Seville, 1808) was named Chief Attorney of the Council of Castile by Charles III and sent to Rome by the king to press through the move to dissolve the Company of Jesus (1767). Upon his return to Spain, he was given the title of Count of Floridablanca and in 1776 was named First Secretary of the State, a post which he held for sixteen years under the reigns of Charles III and Charles IV. He became known above all for his interest in problems relating to agriculture and irrigation, and carried out some major hydraulic projects, including the conclusion of the Imperial Canal of Aragón.

When Goya immortalized him in this portrait, Floridablanca was at the zenith of his powers. In this official portrait, the count appears in the centre of the composition, standing, somewhat magnified in stature and with a distant air about him. In his right hand he is holding a pair of glasses and is dressed in a formal red suit, with the blue sash of Charles III across his chest.

To the left, Goya depicts himself in profile and standing out against the light. He is dressed elegantly for the occasion, with a dark coloured frock coat, white shirt with lace edging at the neck and cuffs, short trousers complete with buckles, white stockings and dark shoes, also with buckles. He is showing a painting to the count (a sketch for the church of San Francisco el Grande, according to the hypothesis of F. Nordström). Behind the count and before a table which is covered in and surrounded by various plans of the canal and a large desk clock, is an unidentified figure (perhaps the canal's engineer) holding a set of compasses in his hands. On the wall at the back, on the right-hand side, there hangs an oval-shaped bust portrait of King Charles III, whilst on the left a large curtain has been pulled back to partially reveal a landscape. On the ground and in the foreground, to either side of the count's feet, is a piece of paper bearing Goya's signature (on the left) and a volume of Práctica de la Pintura, by Acisclo A. Palomino (on the right), one of the most important Spanish treaties on the art of painting.

This is one of the first important works that Goya was commissioned to paint, and came shortly after his being elected academician of the Royal Academy of San Fernando (1780). This election granted him access to the circle of aristocrats and some of the most important figures in Madrid's society.