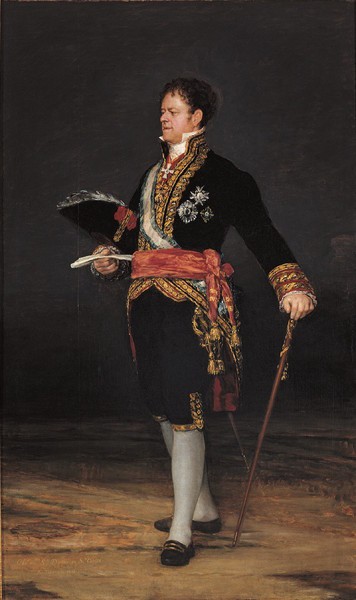 José Miguel de Carvajal, Vargas y Manrique (Lima, 1771-Paris, 1828), Duke of San Carlos, Count of Castillejo and El Puerto, had connections to Ferdinand VII when the monarch was still Prince of Asturias. Back then he was the prince's assistant and was by his side during the Aranjuez uprising against Godoy and the Escorial conspiracy. When Ferdinand VII came to power he became palace steward, and Secretary of State when the court returned to Spain in 1814. The king's favour would also see him appointed lifetime director of the Bank of Spain and director of the Spanish Royal Academy.

In Goya's full-length portrait of him he is shown in gold braided black military dress, white stockings, with a striking red sash around his waist, and numerous medals and decorations pinned to his dress coat: the Golden Fleece, the sash and insignia of the Order of Charles III, and others. His right arm cradles his hat and he is holding a letter in his hand, whilst his left hand, further away from his body, rests on a baton, giving the duke's pose a distinguished air.

His face is the most accomplished part of the work, realized from a life study that now belongs to a private collection in Madrid. In fact, still visible in the painting, underneath the head, are the pencil marks that Goya made when drawing the grid he used to transfer the composition from the study to the final work. The slightly squinting eyes, as if struggling to focus, alludes to the duke's short-sightedness. His myopia even led him to lose his post as Secretary of State, or so alleged his beloved Ferdinand VII, who later appointed him to diplomatic posts abroad. His face, seen here in profile, plays down this defect, along with others of his less than handsome physical appearance, such as his pronounced lower jaw and hooked nose, which Goya has toned down within the limits permitted by realism. The low viewpoint which makes the figure appear larger than life, the noble pose and the elegant finish on the details of the clothing all make it clear that this portrait is a gesture of gratitude from Goya to the model, who spoke out in the artist's favour to help exonerate him from the suspicions of the inquisition.