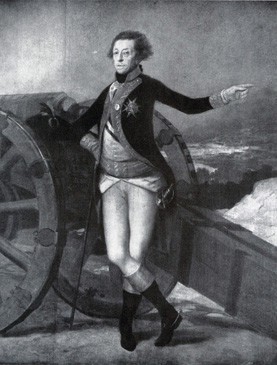 This portrait belonged to its subject until 1794 when it passed into the possession of the Marquis of Valencia del Alcor in Seville, subsequently belonging to the Marquis of Montilla, also in Seville.

Goya also painted a half-length portrait of the same figure.

In this case, General Ricardos is pictured in a standing position with his legs crossed, leaning on a cannon on top of which he has placed his hat. He seems to be pointing to the battle front which was the scene of his victory with his left hand. He wears the uniform of a Captain-General and the insignia of the Order of Charles III and the Order of Santiago. The dark tones of his frock coat contrast with the lighter hues of his trousers and waistcoat. The subject is standing in an outdoor setting: the stormy skies attract the viewer's attention and give the composition a rather foreboding air.