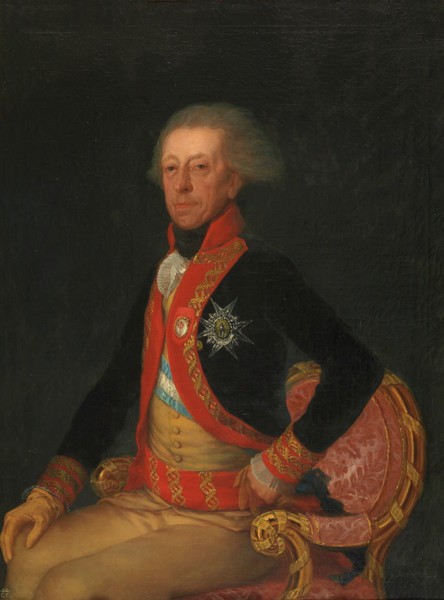 This painting was given by María Francisca Dávila, widow of General Ricardos, as a gift to Manuel Godoy in 1794. It was among the assets seized from Godoy by Ferdinand VII in 1808. In 1813 it was returned to the Countess of Chinchón, being stored in the palace of Boadilla del Monte, in Madrid. From there it entered the collection of Pedro Fernández Durán y Bernaldo de Quirós, who left it to the Prado Museum in 1930, where it was hung in the room dedicated to Fernández Durán, inaugurated on 20 June 1931, in accordance with the conditions of the donation.

General Antonio Ricardos (Barbastro, 1727-Madrid, 1794), was a distinguished soldier as well as a patron of poetry, the arts and music. As a young man, he entered the Cavalry Corps, later founding the Ocaña Military School for officers, and was a member of Madrid's Royal Economic Society of Friends of the Country. A man of progressive ideas, he was pursued by the Inquisition and by Floridablanca, for which reasons he was posted to Guipúzcoa as Captain General of the province. He took part in the campaigns in Italy and Portugal. He was a Knight of Santiago and, in 1792, was awarded the insignia and sash of Charles III. In 1793 he carried out his most important campaign, defeating the French army at Trouilles.

Here, Goya shows him seated in a pink upholstered armchair over a dark, neutral background. He is elegantly dressed in military uniform, in yellow tones that match his gloves, a dark dress coat with red and gold adornments and braiding and the medals earned throughout his military career: the insignia of the Order of Santiago and the cross and sash of the Order of Charles III.

On his face, aged by the years and weathered by his military campaigns, we can see the white mark left by the hat on his forehead, above the more golden tones of the rest of his face. According to some scholars, this work could be a preparatory study for the full-length portrait of the general also completed around this same time, and of questionable attribution. Some of the details, such as the finishing touches on the metals, embroidery and lace, may be the work of another painter.