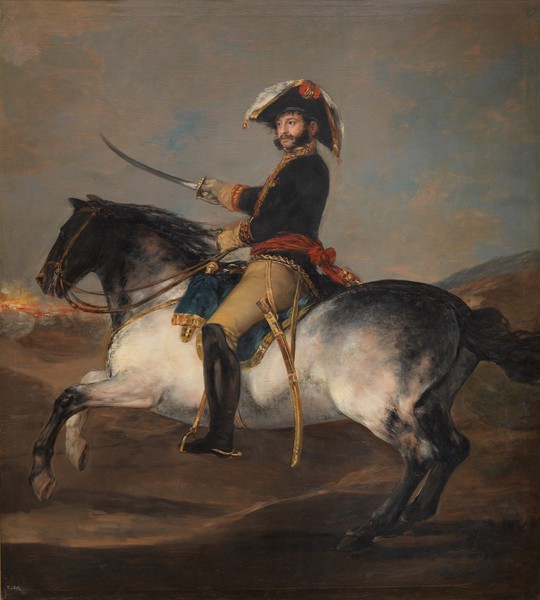 Goya may have been commissioned to paint this portrait by General Palafox himself. In a letter the artist wrote to the general, dated 4 January 1815, Goya reports having satisfactorily completed the portrait.

However, it appears that the painting was still in the possession of Javier Goya, the artist's son, in 1831, who in this same year wrote a letter to the general offering him the work. Palafox finally purchased the portrait.

It was bequeathed to the Prado Museum by Don Francisco Palafox y Soler, the general's son.

It entered the museum's collection in 1884.

José Rebolledo de Palafox y Melci was born in Zaragoza in 1776. At the age of seventeen he entered the Royal Guard Corps. He soon reached the position of brigadier of the Royal Armies. In 1808 he was named Captain General of Zaragoza. A hero of the Spanish War of Independence, he defended the city of Zaragoza against the French assault.

This painting, which, thanks to its inscription, we know was painted after the Spanish War of Independence, was made in the same year as two other works that occupy an important place in the artist's career, those of the Second and Third of May.

Goya, who always claimed that the most difficult task that could be asked of an artist was the execution of an equestrian portrait, abandoned in this instance the Velázquez-style models that he had used in earlier works in preference of a dynamism and movement that the earlier equestrian portraits of, for example, Maria Luisa or Charles IV had lacked. This painting gives us the sensation that the model has not stopped to pose but rather that the artist has managed to capture the moment in which he heads towards the battlefield, with great momentum and bravery, wielding his sabre is his right hand.

The general is dressed in military uniform, his dress coat decorated with epaulettes and medals that Goya has painted with somewhat imprecise, quick brushstrokes.

In a private collection in London there exists a bust portrait of Palafox (measuring 76 x 52 cm) which some consider to be a preparatory work for this equestrian portrait.