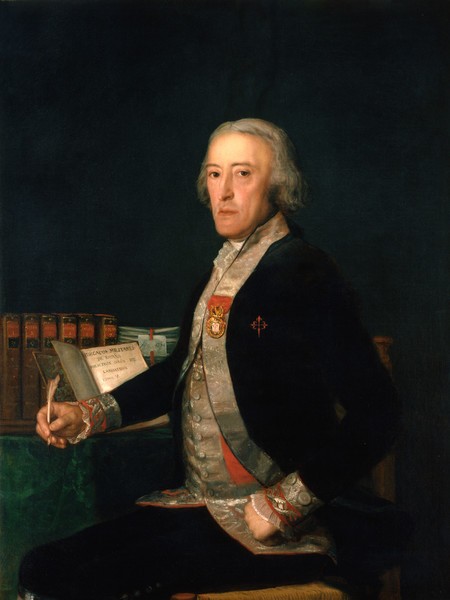 With the marriage of Bernarda Colón, the sitter's daughter, to the Count of Atarés, this work came into the possession of the Count of Robres, in Zaragoza. It was later the property of the Baron of Sangarren, Zaragoza; Ricardo Traumann, Madrid; José de Santa María, Paris; the Sedelmeyer Gallery, Paris; the Wildenstein Gallery, New York; and J.K. Lilley, of Indianapolis. Afterwards, it was inherited by the heirs of Lilley and, donated by the Krannert Charitable Trust, came to form part of the collection of the Indianapolis Museum of Art in 1975.

Félix Colón de Larreátegui belonged to a Basque noble family and was a descendent of Christopher Columbus. He was Field Marshall and member of the Supreme War Tribunal in 1815. In 1794 he entered the Order of Santiago, and he may have commissioned Goya to paint this portrait to commemorate his admission into this military order. He wrote a major work entitled Military Courts of Spain and its Indies (Juzgados Militares de España y sus Indias), which ran to seven volumes, all of which are represented here in this painting.

On this occasion, Goya depicts his subject seated, capturing the instant in which the figure has interrupted his writing in order to pose for the artist. In his right hand he holds a quill, whilst his left hand rests on top of his leg. He is wearing a blue dress coat with silver braiding and the insignias of the Order of Santiago. The figure sits before the typical dark, neutral background that Goya tended to use in his portraits in order to give more prominence to the sitter.

His face is exceptionally built, angular, with large, fine features, his lips slightly parted, and his intelligent gaze appears to penetrate straight out of the painting to meet that of the viewer. According to J. Baticle, this is one of Goya's most psychologically penetrating likenesses.