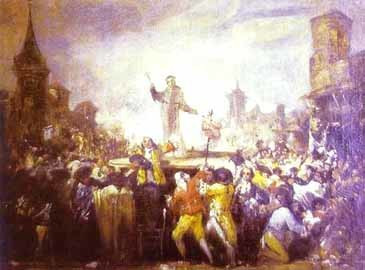 This work and its companion painting, Charles III Issuing the Edict Expelling the Jesuits featured in the monographic exhibition of the Frenchman Charles Yriarte in 1967, registered as belonging to the collection of Mr Villars in Paris. When they were exhibited in Paris in 1925, they belonged to the French collection of O'Rossen. They have not been exhibited in public since.

According to Yriarte this work represented the execution of the order to expel the Jesuits from Spain, forming a pair with the painting entitled Charles III Issuing the Edict Expelling the Jesuits, which shares its history. Nevertheless, this is not the real subject of the work. Gassier correctly deciphered the lettering which is raised on a banner by one of the figures in the composition as reading "Muera / Es / quilache" ("Die / Es / quilache"), while Milicua interprets the letters as spelling out "¡Muera el fantoche!" ("Die, puppet!"). The real subject of the work is, therefore, the Esquilache riots which took place in 1766 in Madrid following the announcement of a local law dictating the clothing to be worn by citizens. They were actually a consequence of the hunger caused by the constant rise in the prices of essential foodstuffs and the mistrust of the Spanish towards the foreign ministers of Charles III. One of the outcomes of the riots was the promulgation of an edict abolishing the Jesuit order.

The painting represents a street scene in which the local population is at the centre of a revolt. They crowd around the plinth on which a holy figure is raised. On the left, some figures wearing broad-brimmed hats (according to Milicua these are the Jesuits) are set against the group of figures on the right, where a kneeling man surrounded by people in three-cornered hats is cutting a cape. In the background, arranged on a converging perspective, we can make out the architectural forms typical of the city of Madrid such as its towers with their spires, although the exact location depicted has not been identified. Milicua was struck by the fact that Goya had chosen a time of street disturbances as the setting for the implementation of the expulsion order, and admired the goyaesque "I saw it!" character which pervades this work.

Sánchez Cantón was of the opinion that these paintings were undoubtedly authentic works by Goya. He went as far as to say that these were the first of his works in which the artist captured contemporary themes, thus displaying a very early reaction against academicism. Neither Sánchez Cantón nor Milicua were able to see the works in real life; rather, they saw reproductions of them in the catalogue of the Exhibition of Spanish Old Masters. Despite this, the latter considers that they cannot be overlooked, given their historical importance and his conviction that these are in fact Goya paintings. His opinion is based on the impulsiveness and spontaneity of the execution, linking these works with the primitive style of the young artist, recognizable in certain details and the postures of the figures. However, Angelis believes this work is an incorrect attribution, while Gassier and Wilson are sceptical, since there is a lack of material available for comparison and the dating of Goya's early works is uncertain.

Pita Andrade used his speech on his entry into the Royal Academy of History in 1989 to speak about these Goya works, and in particular the current painting. The author points to various similarities between this work and other paintings by Goya. He sees a clear link between the religious figure on the podium (which could be Father Cuenca, if we go by the literary references relating the events, which claim that the priest came out into the streets with a crucifix in his hand) and Saint Vincent Ferrer, which the artist painted around 1770 for the oratory of the Sobradiel Palace.

The dating of these pieces is based on two elements: the subject, and the artistic qualities. Sánchez Cantón dated the works as being from circa 1767, the year when the Jesuits were expelled. This theory has no basis, according to Milicua, since the painting could have been produced long after the events took place. Nevertheless, we can see that the sketches have a freshness which does indeed place them in the time immediately following the events. The argument would still be valid even if the subject of the work were incorrectly identified by these authors, since the Esquilache riots took place just a year before the expulsion of the Jesuits.