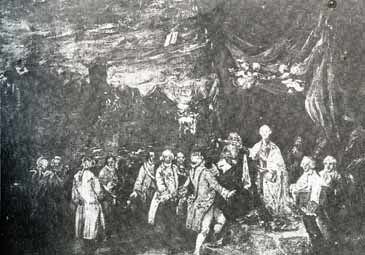 This work has aroused less interest than its companion painting, doubtless due to the fact that it has less of an "eyewitness" quality, the famous "I saw it" which is missing from this work.

The surviving photograph of this work makes its interpretation difficult. The scene features King Charles III with his courtiers, all of whom wear overcoats, sashes and medals, and takes place outdoors, as can be seen from the profiles of the buildings in the background on the left. The monarch is protected by a canopy held up by angels while he listens to a man reading something aloud.

The iconography corresponds to the baroque model: showy and dramatic, the work is characterised by a very goyaesque bravery, genius and abandon, as pointed out by Milicua. The author links the long brushstrokes used for the canopy with the drapes Goya painted on the doors of the reliquary in Fuendetodos, Zaragoza.

José Manuel Pita Andrade dedicated various lines to this pair of paintings (see The Esquilache Riots). His analysis leads him to the conclusion that the meeting between the sovereign and his courtiers was perhaps based on the real State Council called by Charles III in order to get to know his councillors' complaints when faced with the people's uprising during the Esquilache Rots. He therefore proposes a new title for the painting: Charles III Listens to his Councillors during the Esquilache Riots, although he is not entirely convinced.