The Arrest of Christ (El prendimiento) 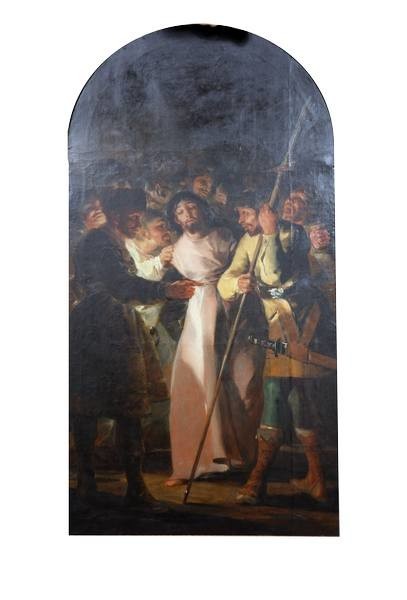 In around 1788 Goya received the commission for this painting from the Bishop of Toledo, as we know from the letter he wrote to his friend Martín Zapater on 2 June 1788. In the letter, he says that he had not even had time to produce a sketch for this work, although he goes into no further details. It seems that the commission he refers to was the Arrest of Christ (there are no details of any other work that Goya could have carried out for this cathedral) and that it was delayed for some years, a fact confirmed when Sánchez Cantón published the minutes of a meeting held at the San Fernando Academy on 6 January 1799, in which it is recorded that Goya presented the commission there. Two days later it was hung in the sacristy of Toledo Cathedral, where it has remained ever since.

Goya knew that the work was going to be lit by the candles which stood on the altar below the painting, as well as those which stood on the altar of the El Greco painting The Disrobing of Christ which dominates the sacristy of Toledo Cathedral. Aware that the upper part of the canvas would be obscured by the gloom of the sacristy, illuminated only by a small window and the candles, he placed the focal point of the action in the lower part of the canvas. The scene is constructed around the crowd of people and, above all, the heads which surround Christ. He is placed in the centre of the canvas, directly lit up by the lamp held by someone positioned behind Judas, who has the light behind him. The Messiah's robe attracts the eye, contrasting with the soldiers' clothing.

The grouping of the figures echoes that of The Disrobing of Christ, as if Goya wished to compete with the other artist. The play of light is reminiscent of Rembrandt. Above all, in this work we find elements which Goya would return to in later years, such as the lantern, here an omen of death, which inevitably reminds us of the lanterns of his Third of May (rec. no.?), or the deformed, unpleasant grimaces of those who surround the pained face of Christ, as if they themselves were a crown of thorns, and a clear predecessor of the Black Paintings. The contrast between bad and good characters is a sign of Goya's Romanticism, which he would employ on other occasions.

The Arrest is a dramatic work, very Goyaesque in nature, with those sketched touches which maintain the tension of the subject. Without a doubt, this is one of the most representative religious works of Goya's oeuvre, even of his work as a whole.