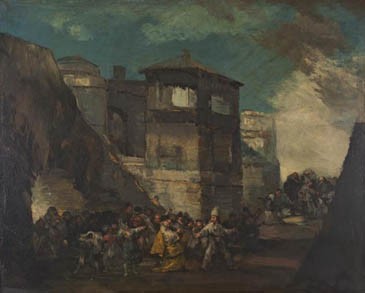 Its first owner was Javier Goya who sold it to Eustaquio Lopez in Madrid, after that the picture went through the Ferrandiz Collection, Madrid, the Cherfils Collection, Biarritz, the Ivan Stchoukine Collection, Paris, the Collection Marcell Nemes, Budapest, the M. Bousquet Collection, Paris and Mor Lipot Herzog Collection, Budapest. Latter passes his son Baron András Herzog Csepel, until the 1944 Nazi invasion of Hungary and the requisition all Jewish families artworks .

In 1945 the picture is recovered by the Russian army and taken to the Grabar Restoration Center. Finally since 1995 the work is in its current location at the Pushkin Museum in Moscow.

A group of people wearing fancy-dress costumes appear to be coming out of a cave on the left of the composition, where they most likely would have begun their celebrations for the carnival. The atmosphere is joyful and boisterous, as we can see by the lively and over-the-top gestures of the party-goers. In the background, Goya has painted some buildings perched atop the rocks, recalling the painting City on a Rock.

The subject of the carnival was represented by Goya on several different occasions. All those who attended this celebration were, for the duration of the carnival, given free licence to be someone they were not, even playing at belonging to a different social class, in a game of shifting appearances. The costumes and the masks broke down social barriers and gave the individual the freedom to behave and to relate to others in such a way that, in many cases, would normally be denied them. This idea, although carried to an extreme, was addressed by Goya in print number 6 of his Caprices series, entitled No-one Knows Himself (Nadie se conoce).

The quick, impasto brushstrokes of this work bring to mind paintings such as The Hurricane, in which, as his grandson Mariano tells us, Goya worked with a reed split open to form a kind of spatula.