This is worse (Esto es peor) 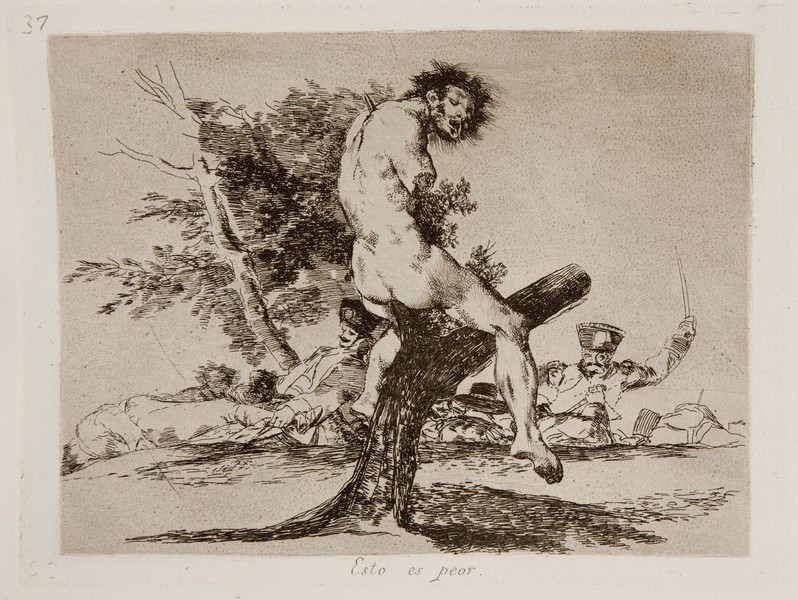 In the foreground Goya has etched a naked body which has been mutilated and brutally impaled on a tree. Behind this in the background a French soldier wields a sword: it is impossible to tell if he is killing someone or dismembering a corpse. On the left, another soldier is dragging another corpse along the ground by the legs.

The impaled body seems to be a demonstration of what the French were capable of in times of war. Goya has taken care over the depiction of the figure, which shows a clear classical influence. It could be said that the studies of the Belvedere Torso Goya made as a young man in his Italian sketchbook during his stay in Rome (1769-1771) give rise to and find expression both in this image and print no. 39, Great deeds! With dead bodies! (Grande hazaña! Con muertos!).

This is worse is also linked to print no. 36, Not this time either (Tampoco), since Goya establishes a comparison between these two forms of punishment, reaching the conclusion that the second is the worse of the two. There is also a connection between this print and no. 33, What more can be done? (Qué hai que hacer mas?) which may form the starting point for this work.

The aggressiveness of nature is patently and cruelly obvious in this work, in which the tree is not only a support for the act but also an instrument of torture.

The plate is stored in the National Chalcography (cat. 288).