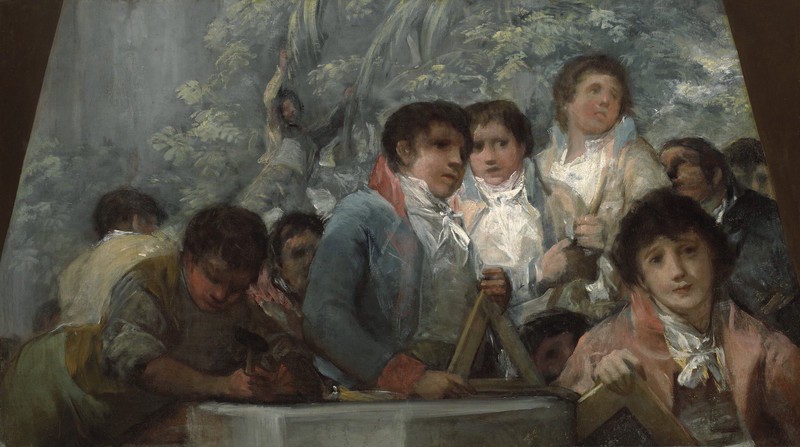 This is supposedly a fragment from the allegorical painting that Goya was commissioned to paint for the façade of the building for the Pestalozziano Royal Military Institute, founded in 1806.

It was Godoy who founded, in Madrid, the Real Instituto Militar Pestalozziano" which was inaugurated in 1806.

Johann Heinrich Pestalozzi was a Swiss educationalist of whom Godoy was a fervent admirer, as the memoirs that he wrote thirty years later show. Of the painting that Goya was commissioned to make, only this fragment is known. Almost simultaneously, however, the Spanish-language edition of Pestalozzi's text The ABC of Intuitive Vision, or Principles of Vision relating to Size (El ABC de la visión intuitiva, o principios de la visión relativamente a los tamaños) was published in Spain (Madrid, Imprenta Real, 1807). On the back cover of this work, there appears an engraving of the institute's emblem, which consists of the royal crest, a boy dressed as a rifleman, objects related to teaching, more children, etc., all elements designed to express in allegorical terms the excellence of the educational system that had been put into place at the institution. At the foot of this engraving a note claims that the image is based on an original painting by Goya, of which it would seem that the only surviving fragment is the one described here.

During the fourteen months that the institute was in operation, it enjoyed the full protection of Godoy. Its premature closure could have been triggered by any number of things, including a possible neglect of religious instruction, its secular tendencies, or the foreign teachers numbered among its staff, in addition of course to Godoy's fall from power soon afterwards.

This piece of canvas, trapezoidal in shape, depicts a group of students in front of the portico of the Pestalozzi Institute.

According to Gudiol, thick, fiery, rapidly-applied brushstrokes are mixed with faded tones and blended highlights. The result is a "sfumato" painting splashed with more intense hues.

The Royal Academy of San Fernando holds a portrait of Godoy, attributed to Agustín Esteve (although at times Goya's name has been linked to it), the background of which depicts the façade of this same institute, along with some of its pupils. Inside the building's pediment we can see a sculpted medallion similar to the engraving mentioned above. It is, therefore, a work related to the one done by Goya.