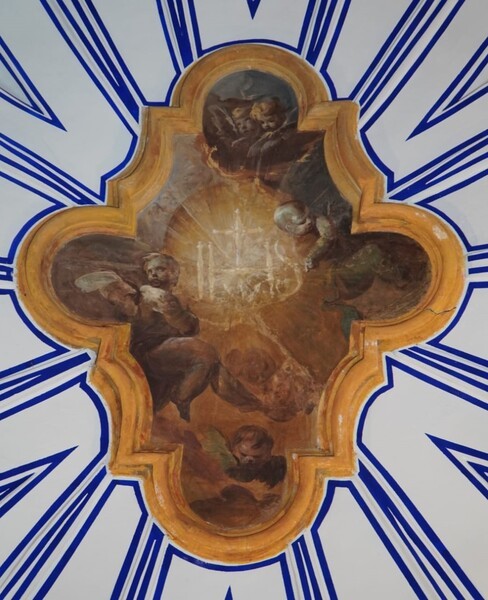 This work attributed to Goya may have been painted around 1765-1766 to decorate the vault of the staircase of the old school of la Compañía de Jesús in Alagón (Zaragoza). P. José Germán was the school's headmaster and director of studies at the time (from 2 February 1765). The expulsion of the Jesuits from Spanish territories in 1767 and the subsequent abandonment of the centres they ran make it unlikely that this painting was produced any later than that year.

The work takes the form of a mixtilinear lobed medallion located in the apex of the lunette vault which encloses the staircase of the building where it is found.

It is a very simple composition whose centre features the monogram of the name of Jesus - JHS - surrounded by small angels who float in the divine light. The angels are very similar to those painted by Goya on the doors of the reliquary in Fuendetodos, in line with similar examples produced by Francisco Bayeu. This is the case of the bald angel in contorted pose that holds up the letters of the monogram.

Two putti are depicted in the upper part of the painting whose execution also owes a debt to Bayeu in their graceful air, clear brushstrokes and the technique used to create the sparkling light effects. The painting might therefore be seen as a representation of Goya's apprenticeship and collaboration with Francisco Bayeu.

Another putto's head appears in the lower section of the painting, painted in chiaroscuro with an unfinished air, giving it a modern touch which precedes Goya's future painting style.

The colours of the painting are reduced to a range of yellowish and burnt ochres, blues, greens and white.