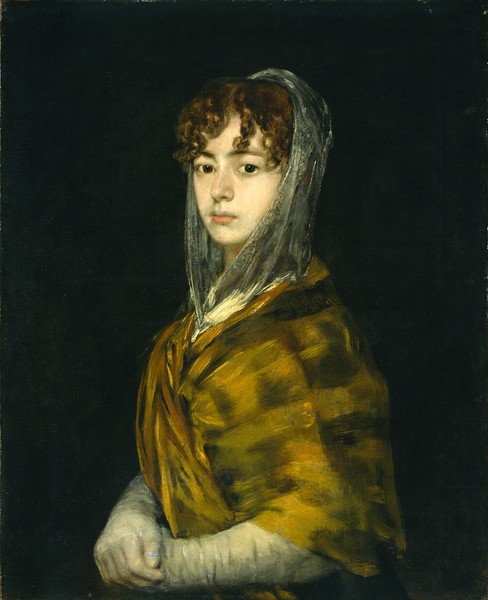 This work belonged to the sitter until her death, when it was inherited by her god-daughter, Mariana García Soler, of Madrid. It later belonged to various collections: Doctor James Simon, Berlin; Count Paalen, Berlin; and Heinrich Skalrz, Berlin. It was subsequently bought by the Duveen Brothers company, New York. In 1930 it was in the possession of Andrew W. Mellon and it entered the collection of the National Gallery of Art, Washington, in 1937.

Francisca Sabasa y García was actually María García Pérez de Castro, born into a wealthy Madrid family in 1790. She was the daughter ofEvaristo Pérez de Castro, whom Goya also painted. The name Sabasa probably stems from a family habit of calling her by that name.

In this half-length portrait, the lady is shown before a neutral background, which makes her stand out sharply. She is depicted simply, without jewellery or symbols to distract the viewer, thus avoiding any reference to her social status. Covering her shoulders is a cape of yellow and gold, and over the back of her head she wears a semi-transparent scarf, allowing some of her curls to fall down over her forehead, giving her a youthful appearance. Her arms are also covered, contributing even more to the figure's elegant appearance. Her face - somewhat serious and distant - looks straight out at the viewer.

Goya painted the clothing with long, broad brushstrokes, in contrast to the fine, delicate ones used for the young woman's face and hair.