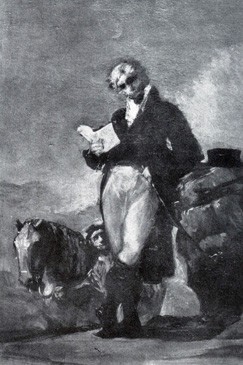 This is a possible sketch for the portrait of the tenth Duke of Osuna.

The sketch was the property of Mariano Goya according to the sales catalogue of Eustaquio López, dated 25 May 1866, where it appeared as lot number 8 and with the incorrect title of Portrait of the Marquis of Sandinos. It was later in the collection of the Ehrich Galleries, in New York. At some point it entered the Bremen Kunsthalle, where it was destroyed during the Second World War.

Given the provenance that goes back to Goya's grandson, it is possible that this portrait is the same one that Antonio Brugada listed as "Portrait of a Young Man, sketch" in the inventory he made of the painter's assets after his death.

It appears that, both for this possible sketch attributed to Goya and for the preparatory drawing that the painter made for the portrait of the X Duke of Osuna, the model was the painter's son, Javier Goya.

In the sketch, the composition perfectly matches that of the finished version, even though the brushwork is much more energetic.

Desparmet questions the authorship of Goya.