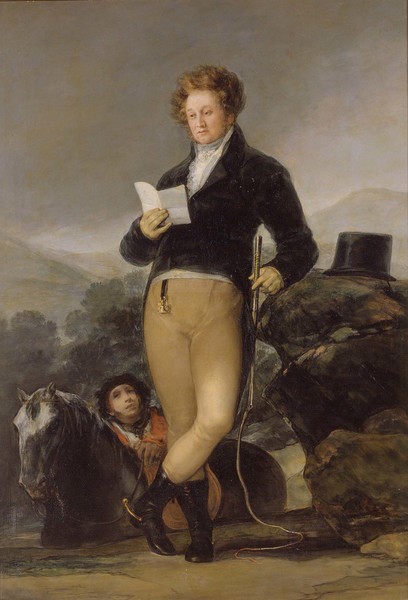 The tenth Duke of Osuna commissioned Goya to make this portrait in 1816. It was painted in August of that year and on 17 November Goya issued a bill for 10,000 reales, a sum which he did not receive until 26 April 1817 through the auditors of the duke's estate, owing to the financial difficulties that the duke was experiencing.

The portrait remained in the possession of the Osuna family until the twelfth duke. It was then put on sale at the time of the bankruptcy of the ducal household and was acquired by León Bonnat for his person collection, which was to form the Musée Bonnat in Bayonne.

Francisco de Borja Téllez y Girón (Madrid, 1785-Pozuelo de Alarcón, Madrid, 1820) was the tenth Duke of Osuna and Grandee of Spain, first class. He was the son of the IX Duke of Osuna and the Countess-Duchess of Benavente, loyal patrons of Goya since his 1788 family portrait The Family of the Duke of Osuna. In 1807, having already inherited the title of Duke of Osuna, he accompanied Ferdinand VII and Godoy to the interview with Napoleon in Bayona. The family's economic situation had been badly affected by the losses of the trading company founded by the duke's father. During the war he went with his family to Cádiz, where he supported the constitution. On the return of Ferdinand VII, he was taken out of service and his requests to retire outside of Madrid, given that his health had deteriorated since the end of the war, were denied. He was finally allowed to go to Pozuelo de Alarcón, where he died.

Along with that of the sitter's sister, The Duchess of Abrantes, this is the last aristocratic portrait that Francisco de Goya painted. As usual, the painter has managed to capture the personality and mood of his subject. The full-length portrait shows the duke from a low viewpoint, helping to make him appear larger than life. Behind him, on a lower level, his loyal footman brings him his horse. The duke is leaning on a rocky outcropping, on top of which sits his hat. In allusion to the family portrait of 1788, in which Goya painted this same man as a child playing at riding a horse, he is shown here wearing riding clothes, and with his left hand he is idly playing with the whip. In his right hand he is holding a letter, which has managed to draw his full attention. Even without knowing the content of the letter we can see that it does not hold good news, going by the sad and resigned look on the duke's face, which is framed by his blond hair in a fashionable cut.

The colours are washed-out and grey; even the yellow trousers and gloves appear dulled. In the background, framing the figure, we see a landscape sheltering underneath a leaden, stormy sky, giving the portrait a strong romantic character very much in keeping with the mood of the X Duke of Osuna, whom Goya has depicted with all his skill and mastery, as befitting his sitter's status.

There exists a preparatory drawing for this work at the Prado Museum as well as a supposed sketch, now destroyed, which was at the Kunsthalle in Bremen.