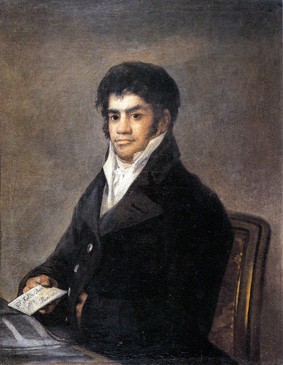 The painter Marcel Briguiboul, who had studied in Spain, bought this piece by Goya in Madrid, together with two others, also by the artist: The Junta of the Philippines and Self-Portrait wearing Glasses. His son, Pierre Briguiboul, bequeathed these paintings, together with other pieces from his collection, to the Goya Museum in Castres in 1893-94.

Francisco del Mazo (Peñilla de Cayón, Santander, 1772-?) was the cousin of Manuel García de la Prada, a collector of Goya's work, theatre aficionado, friend of Moratín and a member of Goya's circle of friends, and also a sitter for one of the artist's paintings. It appears that Francisco lived for several years with his uncle, aunt and cousin in Madrid, where he met Goya. Moreover, he was "agente de casa" to the Duchess of Alba, providing another connection to the artist. Both he and his cousin were art lovers, although his professional career was in finance and he was a member of the Governing Board of the Bank of San Carlos. Francisco del Mazo also held the post of "Chief Bailiff of the Inquisition of Logroño", which makes it unlikely that his ties to Goya, who was opposed to the activities of the inquisition, went beyond the contact necessary for the realization of this portrait. Even his cousin, who was connected to the government of Bonaparte, was forced into exile whilst Del Mazo held his post after the return of Ferdinand VII. According to Nigel Glendinning, Goya must have painted this work for money rather than due to any friendship between the artist and his client, despite any connections they may have shared.

This painting forms part of a series of portraits of art-loving traders and bourgeois. Francisco del Mazo is shown sitting in a chair in front of a desk on top of which is a book of drawings or prints, suggesting that the subject dedicated his free time to studying the arts. The inscription on the letter he holds in his right hand is not clearly legible. Although the majority of scholars interpret the word in red to read "Santander", Glendinning points out that no such street existed in Madrid and the most likely explanation is that Del Mazo was between addresses at the time the portrait was made. He did in fact buy a house in 1815, and if this really was the reason for the unclear inscription, the work could be precisely dated to that year.

Del Mazo is shown dressed in a black cassock with bright buttons, rendered with white touches of the brush. His white shirt reaches all the way up to his chin. His hands are barely visible, one being foreshortened and covered by the letter and the other concealed inside his jacket, as was common in these portraits. Such "handless" portraits had a lower value than those that showed the sitter's hands, and were less expensive as a result. Francisco del Mazo's face reveals his rough features: a wide, flattened nose, fleshy lips, bushy eyebrows and thick head of black hair, which extends down into the wide sideburns that cover his cheeks. Without a doubt, the subject had a very particular physiognomy which Goya did not wish to hide under any idealization.