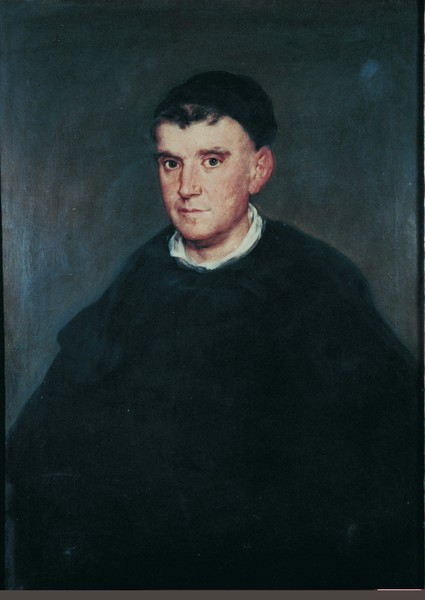 The details of the commissioning of this portrait are not known, and neither is its exact chronology, with the work being dated according to the painting technique. However, we do have the evidence left by the sitter's niece, Carmen Arteaga Fernández de Reboto, as published in the book by María Rosario Barabino. The sitter's relative speaks of the close relationship between her uncle and the painter, forged by the numerous artistic discussions that the two men had, the artist being aware of the other man's profound knowledge of art. The high esteem in which the artist held Friar Juan resulted in the painting of this portrait, despite the constant refusals of the monk. This is a portrait in which, in the words of Carmen Arteaga, Goya employed "all of his artistic knowledge, particular in the likeness and the colouring".

Margarita Moreno de las Heras suggests that the work belonged to the sitter and was inherited by his niece, Carmen Arteaga Fernández de Reboto, in Madrid. It later became the property, again by inheritance, of her brother, Santiago de Arteaga. In his will, and with the agreement of Fray Juan himself, it entered the collection of the Royal Academy of History in 1857.

Juan Fernández de Rojas (Colmenar de Oreja, Madrid, 1750-Madrid, 1819) was an intellectual and an expert in philosophy, literature, poetry and theology. He trained at the Poetic School of Salamanca, teaching at the Augustinian school of San Felipe el Real - in the Madrid convent of which he died - and was professor of theology and philosophy in Toledo. An advocate of modern theology, he came under attack from the more conservative quarter of the Church. He became famous for his Christian speeches and his writings: literary criticism and satirical plays. He was a close friend of Goya, advising the painter on art and aesthetics, and the satire practised by both men in their respective fields of literature and painting gave them a shared way of seeing the world.

In this portrait, Goya has focused all of his attention on the facial features of the cleric, paying little attention to his clothing or the background. As such, the black cassock appears as a shapeless mass, dark and flat, like a triangular compositional element on top of which the magnificently executed head rests. The background is of an indeterminate greenish grey colour, and is also flat. The face of Friar Juan Fernández reflects wisdom through his intense gaze. It is executed using short brushstrokes that have been carefully built up to form the features, resulting in what is one of Goya's most attractive portraits from the period.