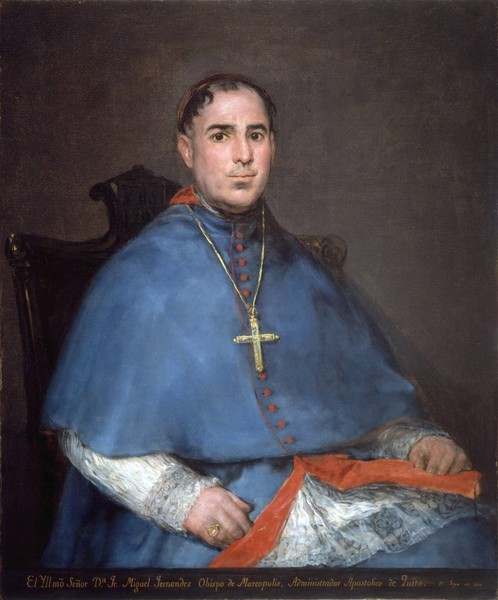 Goya was almost certainly commissioned to paint this portrait to commemorate the sitter being named Apostolic Administrator of Quito, as the inscription states. Given the connection to the Spanish colonies, Ignacio Omulryan, minister of the Council of Indies, whom Goya had also painted, may have acted as mediator between the subject and the artist.

Friar Miguel Fernández Flores (Bujalance, Córdoba, 1764-Seville, 1822) was named auxiliary bishop of the prelature of Quito in 1814. In 1815, he was named bishop in partibus of Marcópolis and, immediately afterwards, Apostolic Administrator of Quito. In 1816 he was appointed Bishop of Quito, but despite his strong ties to the country, there is no evidence that he ever visited Ecuador. After his career as cleric, he became the domestic bishop of the king's council.

Here he is depicted with all the pomp and splendour that befits his position. Following the tradition of papal portraits, the portrait is half-length, showing him seated in an imposing seat of honour and dressed in his bishop's suit, sky blue with red lining and buttons, and white lace on the alb. Standing out on his right hand, which is resting in his lap, is a large gold ring, and around his neck hangs a large gold cross. He is facing forwards, his body forming a clear triangular shape, at the top of which is his head, standing out against a neutral background. His face, painted with a marked verism, looks out at the viewer with an attentive gaze, as if the Franciscan were drawing us in to the portrait's creative process.