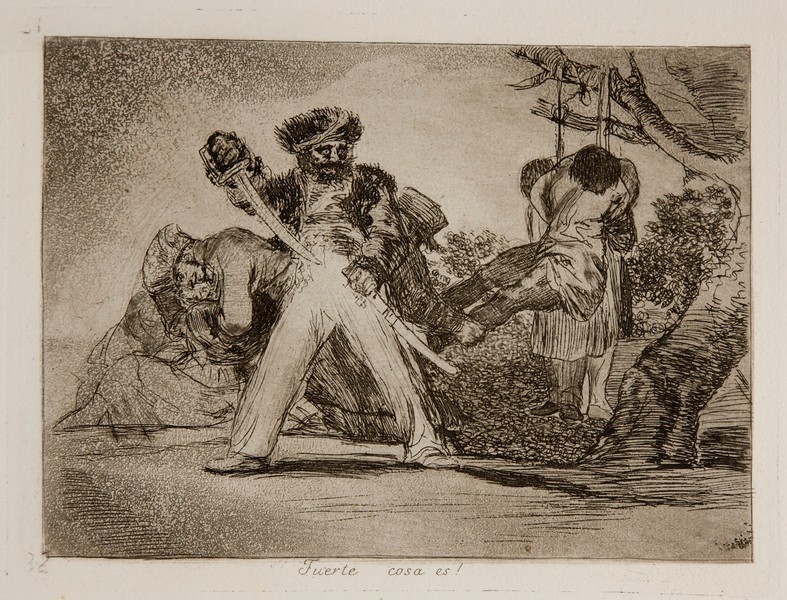 32 (on the lower left-hand corner)

The number 32 appears on the lower left-hand corner of the third artist's proof.

In the centre of the composition a French soldier is holding a sword as he gazes fearlessly at the bodies of two hanged men. Behind that soldier is another who is pulling on the leg of one of the bodies.

Although it is not entirely clear what the French soldiers are doing, it seems that the soldier who is pulling on the hanged man's leg is attempting to check whether he is dead or perhaps to hasten the man's death, increasing the cruelty of the act committed and highlighting the cold-bloodedness of the soldiers carrying out the hangings. The Frenchman in the foreground in the centre of the composition is drawing his sword to cut the rope from which the dead man hangs.

Interpreting the two figures on the left in the background is a more difficult task. A soldier holds up a woman who is partially hidden from view, and it is difficult to tell if the soldier is holding her back, preventing a violent reaction or comforting her in her anguish.

Nature has an important role in this work. As in the case of other prints in the series, the setting is arid, jagged, serving as a weapon capable of inflicting pain on the human body. Nothing in the natural world presented in this work suggests that it is a source of life.

This print is characterized by a somewhat more hasty technique than others in the series, rendered in quicker, more immediate lines. The artist is less precise here than in the case of other prints in The Disasters of War, employing fewer marks to convey figures which are less well characterized.

The plate is stored in the National Chalcography (cat. 282).