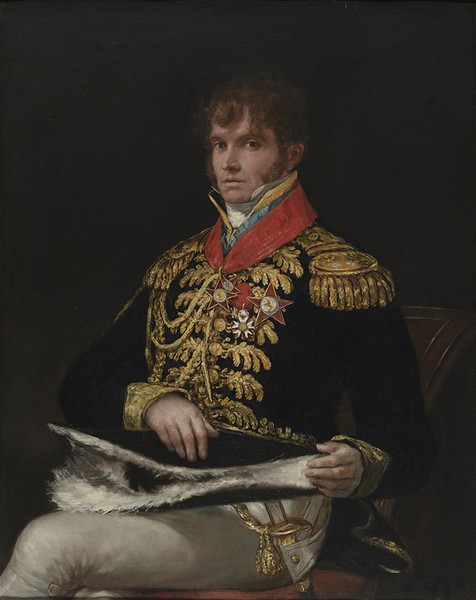 canvas, now covered by the lining and brought to light by Beruete in 1913, this portrait and that of the sitter's nephew, Victor Guye, was presented as a gift to Nicolas-Philippe's brother, Vincent Guye, in 1810.

Before arriving at its current location it was in several different collections: Vincent Guye, Madrid and France; the Guye family; Trotti & Cie, Paris; M. Knoedler & Co., Paris, London and New York; acquired in 1916 by Mr and Mrs J. Horace Harding, New York; and later by John Lee Pratt, New York. It was bequeathed to the Museum of Fine Arts in Richmond, Virginia, in 1971 by John Lee Pratt.

It was Beruete who first brought this painting and its pair, the portrait of Victor Guye, to light, claiming that neither of the two works had ever been exhibited or reproduced before.

Nicolas-Philippe Guye was a distinguished French general who served in the Napoleonic Wars. He was born in 1773 in Lons-le-Saunier, into a bourgeois family. He fought alongside Napoleon in the famous battle of Austerlitz, as well as in other important military campaigns. An aide of King Joseph Bonaparte in Spain, in 1809 he received the title of Knight of the Royal Order of Spain. When he left Spain, after his very active role in the Spanish War of Independence, he was named an Officer of the Legion of Honour. In 1815, he took part in the campaign of Waterloo.

Here the subject is depicted sitting upright, his back not resting on the chair, with his legs crossed and both hands gently holding his two-cornered hat. He is elegantly dressed in military uniform, where, in addition to the golden epaulettes, his many medals stand out, with the most striking being the red sash and cross of Knight Commander of the Royal Order of Spain.

The general, who is looking straight out at the viewer, is painted with a certain serious and melancholy look upon his face. Manuela Mena points to a possible difficult relationship between Goya and his sitter.