Thanks to the grass pea (Gracias à la almorta) 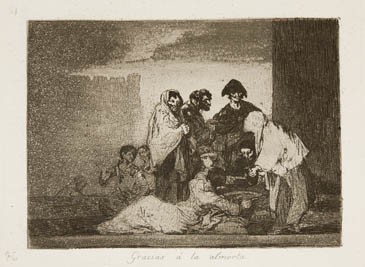 A woman whose face is invisible to the viewer and who is completely covered from head to foot is giving out food to a group of starving people. The food seems to be soup, most probably made with grass pea flour, as indicated by the print title. In the foreground is a woman lying on the ground dressed in white and clutching a spoon in her hand who holds out her plate with her outstretched arm. Behind her are three standing figures whose faces are caricatures: their pronounced jaws and cheekbones, sharp noses and sunken eyes denote that they have been suffered greatly during the famine that devastated Spain at the time of the Spanish War of Independence. The figures' clothing is eccentric and ragged garments obtained by any means possible during the war, some of which doubtless originally belonged to others. In the middle ground Goya has placed two women with spectral faces who have perhaps already consumed their ration of soup. They are clearly reminiscent of the figures depicted in another work by the artist, Old Women (Las viejas).

The grass pea was used as a substitute for other cereals during the war, since it would grow in extremely harsh conditions even if it was not well tended. Prolonged consumption of large quantities of this legume could lead to serious illnesses such as lathyrism, which causes spasmodic paraplegia and can cause serious growth problems in children. With the title of this work, Thanks to the grass pea, Goya makes reference to all the issues associated with this product. On the one hand, it served to alleviate hunger, but on the other hand it also caused diseases and even death. Perhaps this is the key to interpreting the sinister cloaked figure who gives out food to the needy, simultaneously contributing to the poisoning of all those who ate it.

The plate is stored in the National Chalcography (cat. 302).