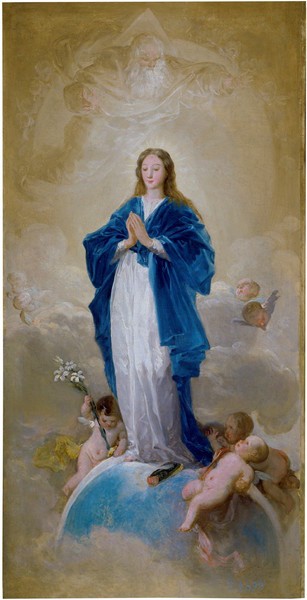 Goya gave this sketch to Gaspar Melchor de Jovellanos some time before August 1800. Later, as the inscription on the frame tells us, the painting became part of the collection of Acisclo Fernández Vallín, and subsequently, Eulalia García Rivero, who sold the painting to the Prado Museum. The museum acquired the work on 10 November 1891 by means of a Royal Order signed by the Ministry of Development. It was explained that the Queen Regent authorized the purchase of the sketch from its former owner for a price of 3,000 pesetas. It was then placed in the gallery's storage vault until 1977, when Xavier de Salas, the Museum's Director at the time, published the work, defending the attribution to Goya and placing the work on display once more.

It is, without a doubt, the sketch presented by Goya to the Council of Military Orders presided over by Jovellanos, to whom he would later give the painting as a gift to thank him for his patronage. It is the only surviving part of the commission received by Goya in 1783 to paint four works for the Church of the College of Calatrava in Salamanca. One depicted the mystery of the Immaculate Conception, whose cult the knights of the Order of Calatrava had sworn to defend. The other three paintings were dedicated to Saint Raymond, Bernard, and Benedict. The four paintings were destroyed during the Spanish War of Independence.

The compositional model for this sketch seems to have been the work of Mengs. Sánchez Cantón also sees echoes of Giaquinto's style, highlighting the execution of the angels, very much in the Goyaesque style. In reality, this Immaculate Conception is a move away from the baroque: the folds of the Virgin's mantle do not fly about her in an artificial way; rather, they fall naturally, adapting to the shape of the body. In the upper section of the painting, Mary is surrounded by a glory presided over by the figure of God, who extends his arms in a protective gesture. In the lower part of the sketch, Mary is shown supported by the earth and half moon, treading on the serpent, together with some small angels. The homeliness of the Virgin, with her lowered gaze and hands pressed together in prayer, make this an excellent devotional painting.

When this work was acquired by the Prado Museum, it was believed to be an original Goya painting, and was classified as such in the report written by the General Secretary of the San Fernando Royal Academy of Fine Arts.

Despite this favourable report, the work remained, forgotten, in the museum's storage rooms until it was rescued by Salas. This author based his attribution to Goya on its provenance and the similarities between this work and one of the Conceptions belonging to Jovellanos. The inscription on the frame confirms that the painting belonged to the politician, and the mention of the work (specifying that it is a sketch) in Jovellanos' correspondence backs up this correct identification.

However, arguments have also been made against Salas' conclusions (LUNA, 1996). It is not possible to verify the validity of the inscription, since it was carried out by the former owner, Eulalia García. Moreover, the definitive work is unknown, and the style of this study does not match that of others dealing with a similar subject by the painter, such as Coming of the Virgin of the Pillar to Zaragoza, in which the paint marks are more sketchy, executed with rapid brushstrokes. This study exhibits more profuse strokes and a more finished form.