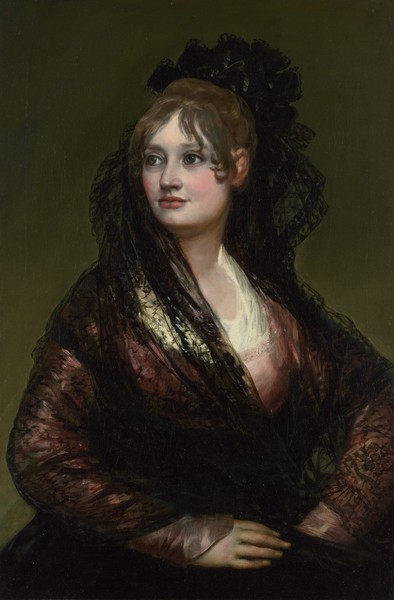 This work came from the Porcel y Zayas collection, Granada, and that of Andrés Urzáiz, in Madrid. The National Gallery purchased it from Urzáiz's heirs in 1896.

Doña Isabel Lobo de Porcel was the wife of Antonio Porcel, officer of the State Secretariat, meaning that she was a lady of the upper middle class. She appears here, in this half-length portrait, in front of a greenish background and with her head turned to the right, one hand resting on her lap and the other hidden below her dress. The artist has depicted her as the typical Goya female figure, or maja, wearing a lace mantilla which falls down over her shoulders and is gathered up at the back of her head to make a pretty adornment. Doña Isabel's posture is a carefree one, and her face grabs the viewer's attention with its large eyes, full lips and rosy complexion. The strong light source accentuates the colours, especially in the mantilla, the lace of which, on this occasion, Goya has chosen not to render with great precision, preferring more rapid, freer brushstrokes.

X-rays of the portrait have revealed that, painted underneath this lady was the figure of a man. The faces of both are almost perfectly superimposed, so that one of the man's dark eyebrows shows through in the face of his successor, making a dark shadow near her chin.