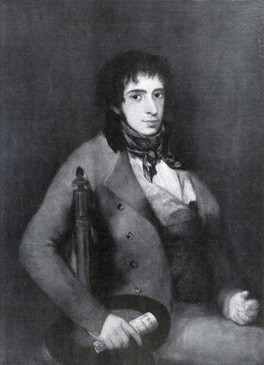 This work belonged to Luis Iñiguez, the sitter's nephew and Mayor of Logroño. It was later in the collection of Paul Lafond, in Paris, and then in that of Durand Ruel, in the same city. It went to the Danielson collection, in Boston, and was stored at the Museum of Fine Arts, Boston. In 1925 it belonged to Charles Deering, of Chicago, who delivered it permanently to the Art Institute of Chicago on 30 September 1989.

Isidro González Velázquez (Madrid, 1765-1829) was the second son of the painter Antonio González Velázquez. He trained as an architect at the Royal Academy of San Fernando and was a disciple of Juan de Villanueva. Among his most well-known works is the Monument to the Victims of the Second of May (Monumento a las víctimas del Dos de Mayo), in Madrid.

The young man is shown seated and in half profile. He is wearing a jacket and has a scarf around his neck, helping to focus the viewer's attention on the sitter's face, which is looking out at us rather timidly. In his hand he holds a rolled-up piece of paper, where we can see Goya's inscription.

The date in the inscription, however, it not clearly legible. Although it appears to say 1801, Daniel Catton Rich suggests that it could actually read 1807. Sánchez Cantón is of the opinion that the second option could be more likely, given how the subject is dressed and the technique that has been employed by the artist. Gassier and Wilson believe that restoration work could have modified the last number in the date, making a 7 appear more like a 1, but they also point out that in the second version of the work (a replica or copy), the date again appears as 1801, but, since this would have been made after the restoration of the original, this would not affect Gassier and Wilson's hypothesis.

This other version belonged to the collection of Generoso González, in Madrid, when it appeared in the exhibition Antecedentes, coincidencias e influencias del arte de Goya (Madrid, Spanish Society of Friends of Art, 1932, cat. 1).