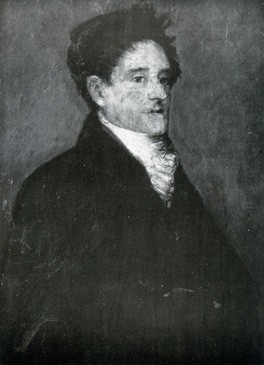 When Goya obtained the king's permission to leave Madrid with the excuse of "taking the waters at Plombières to relieve the illnesses and ailments" of his old age, he headed to Paris, where he stayed for two months. There he met Joaquín María Ferrer and his wife, whom he also painted.

Joaquín María Ferrer y Cafranga (Pasajes de San Pedro, Guipúzcoa, 1777-Santa Águeda, 1861) was a politician. He was elected member of parliament in 1822, Finance Minister in 1836, Minister of State in 1840 and President of the Council of Ministers in 1841. During the reign of Ferdinand VII he was forced to leave the country with his wife, since he had become to be considered a dangerous revolutionary. He settled in Paris. Goya was also put under police surveillance due to his relationship with Ferrer, which was confirmed by this portrait and the letters that he wrote to him.

The half-length portrait shows Ferrer in a black jacket with white tie. He is holding a small book in his hands, alluding to his work as a publisher. He was responsible for a miniature edition of El Quijote. His hair is curly, his features sharp and angular, and upon his face is a worried look. The rapid execution of the portrait and the clear marks left by the brush bring this work close to expressionism, an impression that is further favoured by the sitter's hard-edged features.