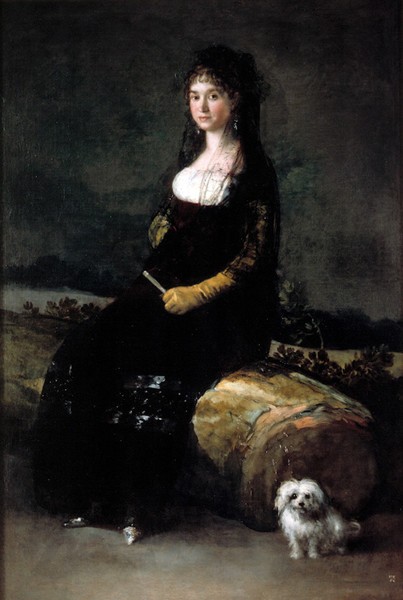 This work was donated by the sitter herself, Joaquina Candado, to the Royal Academy of San Carlos, Valencia, in 1819.

This woman has now been identified as Joaquina Candado Ricarte, of Zaragoza, daughter of the soldier Joaquín Candado and of Josefa Ricarte, probably originating from Spain's eastern Levante provinces. However, some scholars of Goya's work have also identified her as other women, as is the case of Beruete, who relates her to the character of the maja. The Count of La Viñaza states that this could be a portrait of Goya's housekeeper, whom he painted during his short stay in Valencia. Valverde Madrid, on the other hand, states that Candado is the name of the person who donated the painting to the Royal Academy of San Carlos and, according to him, the figure in the painting is actually Doña Leocadia Zorrilla. Glendinning identifies her as Catalina Viola or alternatively as the wife of the sculptor José Folch, both painted by Goya and the whereabouts of whose portraits are today unknown.

The full-length portrait depicts the woman wearing a black skirt and a matching bodice. Over the top of the bodice we can see a very fine blouse. She is also wearing a mantilla and long yellow suede gloves. Her empire-line dress indicates the social standing of this woman, an Aragonese noblewoman. Her left hand holds a small fan and she is wearing pointed silk shoes. She is seated on a log in the middle of a natural landscape, and at her feet sits a small white dog, lending the painting an aristocratic air.

As for the composition, comparisons have been made between this painting and the portrait of the Marchioness of Lazán in the collection of the Duchess of Alba, in which Goya paid particular attention to the head and face of the sitter, who, in this case, stares straight out at the viewer.