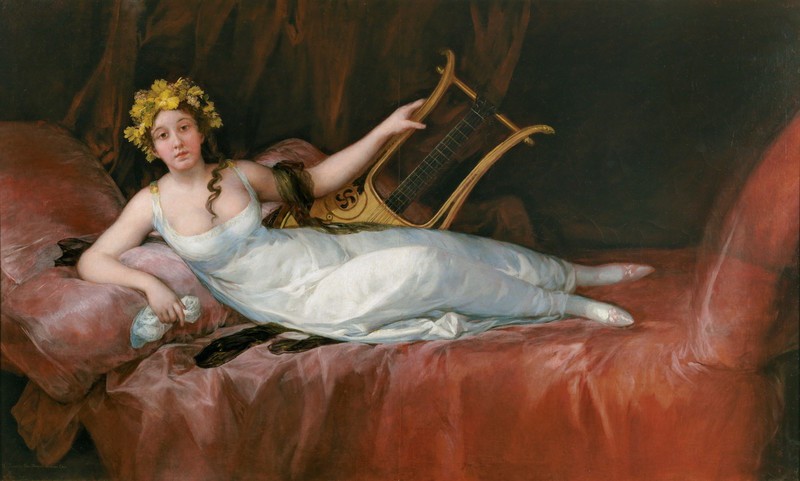 This work belonged to the heirs of the Marchioness of Santa Cruz. It was later owned by the Count of Pie de Concha, son of the Marquises of Santa Cruz. In 1941 it became the property of a Bilbao-based collector, Félix Fernández Valdés. It was acquired by the Spanish state in 1986 with the help of different organizations in order to go to the Prado Museum.

Doña Joaquina Téllez-Girón y Pimentel (Madrid, 1784-1851) was the daughter of the Duke and Duchess of Osuna and was married to Don José Gabriel de Silva y Waldstein, 10th Marquis of Santa Cruz and the first director of the Prado Museum.

Goya had already painted the marchioness, with her parents and siblings, in 1788, when she was just a girl. In this later portrait, considered one of the artist's most sensual, Doña Joaquina was twenty-one years old. She is represented in the guise of a muse of lyrical poetry, in reference to her artistic interests, which she had cultivated since she was a child. She received a careful upbringing from her parents, who opened up their home to the most brilliant musicians, men and women of letters and artists of the time. Goya presents her here reclining on a divan upholstered in red velvet. She is wearing a white dress with straps and a high empire-line waist, with a low-cut neckline and red shoes. Her hair is decorated with a crown of leaves and fruit, alluding to the allegorical nature of this representation. In her right hand she holds a white handkerchief, whilst her left hand rests upon a lyre, a fashionable instrument in late 18th-century Europe, a reference to the sitter's passion for music. We can see on the lyre a four-armed cross, the symbol of the Santa Cruz family.

The face of the sitter, who was considered by her contemporaries to be one of the most beautiful women of her time, looks sensually out at the viewer, emanating serenity, tenderness, elegance and intelligence.

According to some writers, the overall effect of the portrait is very reminiscent of the work of Velázquez, particularly in the way the white of the dress contrasts with the red of the divan on which the figure rests. The folds of the fabric of the sofa are especially well executed, possessing a strong sense of realism.

It is believed that Goya may have taken his inspiration for this work from other portraits. Beruete states that the harmony of colours reminds him of Velázquez's The Toilet of Venus, and Sánchez Cantón compares it to the Majas, by Goya himself, and Titian's Venus of Urbino.

There exists another version of this painting (Los Angeles County Museum) but it is not accepted as an original by Goya.