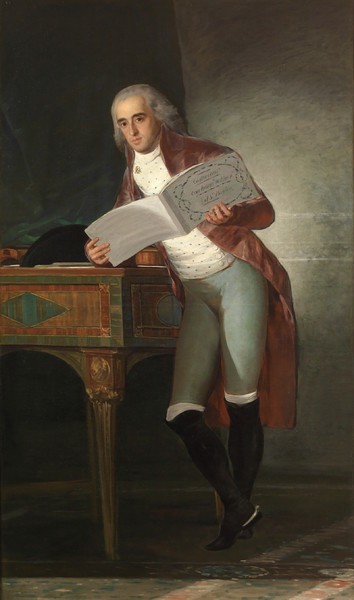 This painting belonged to the collections of the Countess of Niebla, the widowed Marchioness of Los Vélez, the Marquis of Villafranca and the Duke of Medina Sidonia. It was accepted by the board of the Prado Museum on 6 March 1926, entering the museum's collection on 25 May 1926.

José Alvarez de Toledo y Gonzaga (Madrid, 1756-Seville, 1796) became the 13th Duke of Alba upon his marriage to María Pilar Teresa Cayetana de Silva, Duchess of Alba. He received the Golden Fleece and the Grand Cross of the Order of Charles III and was named, in 1791, Inquisitor General of Seville. To carry out his duties he moved to his palace in Seville. He was a great lover of chamber music and a keen admirer of Joseph Haydn, the composer of the very musical score, entitled Four Songs with Pianoforte Accompaniment, that the sitter is shown holding in this portrait.

Goya represents the duke full length, wearing an orange-hued dress coat and leaning on a table, on top of which are a violin and a hat. His somewhat melancholy face reveals a sensitive lover of the arts. On this occasion Goya did not use the dark background so common in his portraits, instead placing the subject in the interior of a palace and in front of a wall which reflects back a light which brightens the room and gives the whole a heightened sense of depth, an unusual detail in Goya's work.

The previously widely accepted belief that this painting formed a pair with the portrait of the sitter's wife, the Duchess of Alba, is today disputed.