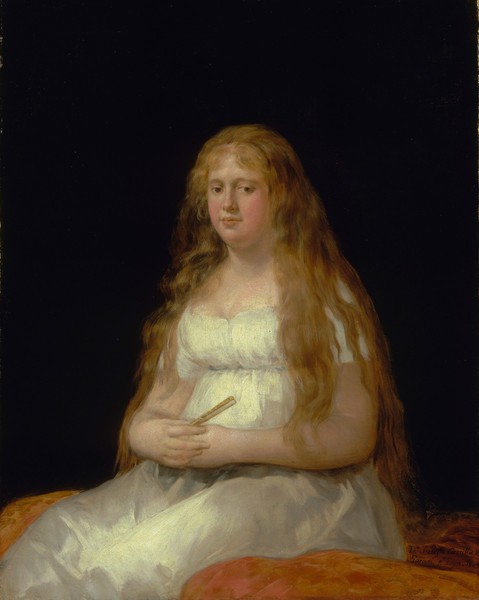 This work remained in the possession of the sitter until her death, when it was left to Vicente Garcini de Madrid, followed by Ricardo de Madrazo. It was sold to Colonel Oliver H. Payne of New York, to be inherited by his nephew, Harry Payne Bingham, who bequeathed it to the museum in 1955.

Doña Josefa Castilla-Portugal & van Asbroeck de Garcini (1775-1850) was the wife of Don Ignacio Garcini y Queralt, who was also painted by Goya in the same year, the two works forming a pair.

The sitter was twenty-nine years old and pregnant when Goya painted her.

She is shown in front a black background, making her stand out much more, and seated on a red divan. She wears a white, empire-line dress with a pronounced neckline that emphasizes her bust, and is resting her hands on her belly and holding a closed fan. This pose recalls that of the portrait of the Countess of Chinchón, now in the Prado Museum. Her loose, golden hair, which reaches all the way down to her waist, is perhaps the most striking feature of this portrait. The sitter's rosy face appears tired, and she gives the impression of having her thoughts elsewhere. The position of the arms is not very well executed, as if Goya had not taken a great interest in this part of the work.

In general, the painting as a whole is not exceptional either for its detail or for its precision, though the fabric of the dress has been carefully rendered to magnificent effect.