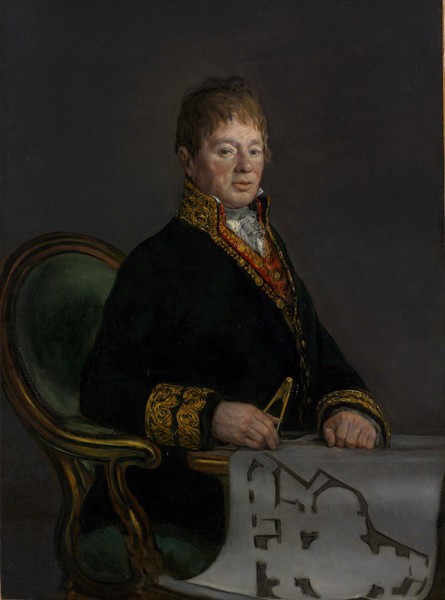 This work was in the collection of Francisco Durán y Sirvent, in Madrid. It was later acquired by Paul Durand-Ruel, of Paris. Subsequently, it was owned by John D. Rockfeller, in Greenwich and New York, and later by Jacques Seligman, in New York. Its next owner, William H. Marlatt, took it to the museum where it is housed today.

Juan Antonio Cuervo (Oviedo, 1757-Madrid, 1834) was an important neoclassical architect. He studied at the Royal Academy of Fine Arts of San Fernando, and later became its director. It is in that role that Goya paints him here, in what was to be the artist's last official portrait, since he left life at court soon after to retire to his house of the Quinta del Sordo. The artist also painted the nephew of the director of the academy, Tiburcio Pérez Cuervo, who, as well as being an architect, was a close friend of Goya, as the carefree air of his portrait confirms.

This official portrait represents the architect dressed in an elegant black jacket with golden needlework at the cuffs and the neck. He is sitting in an armchair and is resting his hands, one of which is holding a pair of compasses, on a table. Covering the table are the plans for a building, identified as the church of San Sebastián, in Madrid, or possibly that of Santiago, in the same city. Although this is an official portrait, its background is dark and neutral, and the features of the sitter's slightly puffy face are handled with a marked realism.