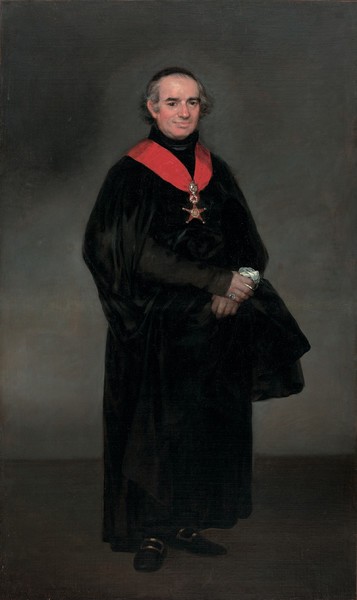 This painting came from the collection of Don Francisco Llorente y García de Vinuesa, Madrid. From there it went to the collection of Juan Lafora, Madrid, and then to that of Durand Ruel, in Paris. In 1903 it was bought by M. Durand-Ruel.

Don Juan Antonio Llorente (Rincón del Soto, La Rioja, 1756-Madrid, 1823) was commissioner of the Holy Office in Logroño, Secretary of the Inquisition in Madrid, Director General of National Assets, and Commissioner of the Holy Crusade. He was also a doctor in canon law, and was ordained as a priest in 1779. This intelligent and cultured man wished to carry out a reform of the Inquisition. A man of liberal ideas, he was persecuted and forced into exile in France, where he continued to write books, among which his Critical History of the Spanish Inquisition (Historia crítica de la Inquisición española) stands out in particular. It was published for the first time in France in 1818, and made use of the information its author had gathered in Madrid when he was Secretary of the Inquisition there. Bonaparte awarded him the Royal Order of Spain, popularly known as "the aubergine", which he is wearing here in the portrait in the form of a ribbon around his neck. He was able to benefit from the amnesty given by the liberal government and return to Spain, dying in Madrid in 1823.

The subject is shown standing, life size, in front of a neutral background. He wears completely black ecclesiastical dress, with the only note of colour provided by the Royal Order of Spain, awarded to him by Joseph Bonaparte during the French occupation of the country. His head is covered by a skullcap, with some of his grey hair falling down around his face. His left hand, the little finger of which bears the ring of Commissioner of the Holy Crusade, is resting on top of the right one, which is gathering up part of his black clothing.

The most striking thing about this portrait is the luminous face of the model, characterised by an alert and intelligent gaze. This is a good example of Goya's ability to reflect a psychological insight into his sitters.

Proof of the ties that Llorente maintained with Goya is a manuscript that he wrote, containing comments on the artist's Caprices series and kept at the Boston Museum of Fine Arts.