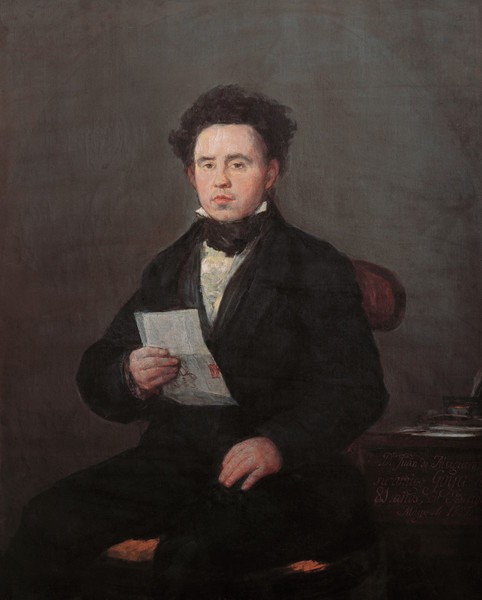 Goya painted this portrait in Bordeaux, where both he and the sitter were living at the time.

The work remained in the Muguiro family for years. It was the sitter's grandson, Juan Bautista Muguiro y Beruete, second Count of Muguiro, who bequeathed it to the Prado Museum in his will of 1908. The painting did not enter the museum's collection until 1945, since until that time it remained in the possession of the donor's brother, Fermín, who also gave the work The Milkmaid of Bordeaux to the museum.

Juan Bautista de Muguiro e Irivaren (1786-1856) was the brother of José Francisco de Muguiro, who was married to Manuela Goicoechea, the older sister of Goya's daughter-in-law. Although it is possible that the painter had already met Juan de Muguiro in Madrid, it was in Bordeaux that they formed a close relationship, the two men belonging to the same circle of intellectuals and Spanish exiles. Thanks to the ties made with these people, Goya's last portraits, many of which are of this same circle, specialized in bourgeois subjects.

The Muguiro brothers owned a banking and trading firm founded years before by their uncle, Irivaren. It appears that they had become involved in Napoleon's finances, and they had left Spain for that reason. Juan Bautista had left the country before Goya, the father-in-law of his son and the married couple of José Francisco and Manuela arrived in Bordeaux. Upon Goya's death, Muguiro insisted on acquiring The Milkmaid of Bordeaux, which he bought from Leocadia Zorrilla.

In this painting, Goya was experimenting with a new type of portrait, one with a simpler composition, neutral background and a far more limited and darker colour palette than that used in previous portraits. Here we see Juan de Muguiro sitting beside his desk, on top of which sit an inkwell and various papers, represented in a very rough manner, with a high degree of abstraction. The businessman is depicted with a letter in his hands, which he appears to be reading. His relaxed posture and calm expression give us a feeling of confidence, something of vital importance in the subject's trade. He is wearing a dark suit, white shirt and dark tie - austere and serious attire, in keeping with his profession.