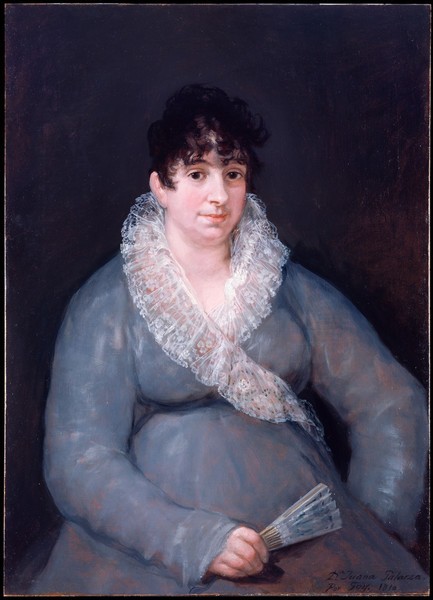 It is not known for certain whether or not this work belonged to Javier and Mariano Goya. It was in the collection of the Marquis of Casa Torres and then that of the Marchioness of Casa Riera, in Madrid, Ca. 1968. It was acquired from her heirs by its present owner.

Goya had already painted Juana Galarza, his son's mother-in-law, on two previous occasions: in profile in a drawing and in the miniature that formed part of the series of decorative medallions that the artist painted to commemorate the wedding between his son Javier and Gumersinda Goicoechea.

This portrait forms a pair with that of the subject's husband, Martín Miguel de Goicoechea.

In front of a neutral background, the solid figure of Juana Galarza is shown seated, in a relaxed pose, looking out at the viewer. She is wearing a grey dress with striking lace around the collar, which gives this bourgeois lady, dressed in the latest fashions, a meticulous, restrained appearance.

Underneath the thin layer of paint used for the dress, we can see the reddish primer that the artist used in all of his works.

Once again, Goya limits himself to suggesting the details of the outfit in order to focus his attention on capturing the facial expression and gaining a psychological insight into his sitter, who in this case is represented with a certain air of melancholy.